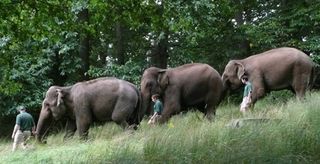 Sky will take a step further in its mission to convince us all of the merits of 3D – with the launch of Safari Park Adventure 3D, a UK-filmed 3D series shot exclusively in Woburn Safari Park.

The 10-part series will begin airing at 9pm on February 4th, on the Sky 3D and Animal Planet (in 2D) channels.

Squirrel monkeys, red-necked wallabies, a hungry pride of lions and 'Raja' the bull elephant are all stars of the show, with the lovingly shot 3D footage bringing the sights and sounds of nature to your living room as never before.

"Woburn offers an inspiring array of some of the world's most endangered wildlife, and each animal has its own distinct personality," said John Cassy, Sky 3D's channel director.

"3D filming techniques enable their stories to be brought to life in a way that was never before possible."