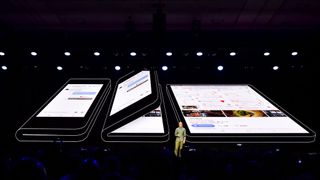 We don’t know full details - the phone is very much still a prototype, but the Korean company wanted to show off its user interface and encourage Android developers to start writing apps for it.

Just ahead of Samsung’s announcement, Google used its Android Developers’ Summit to reveal it was developing Android to support foldable displays.

When folded, the Infinity Flex looks like a regular smartphone. But it can unfold – much like a book – to reveal a larger, tablet-sized 7.3in screen to enhance the multitasking and viewing content experience.

Other than that, all we know is that it can run three apps simultaneously thanks to its ‘multi-active window’ feature.

The unveiling was unfortunately brief, though. Considering the device has been long teased ahead of its 2019 launch, it’s about time we were gifted more details.