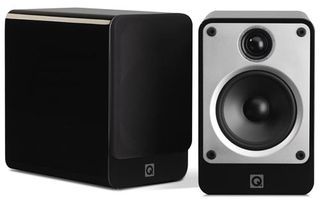 Q Acoustics has today announced the launch of a brand new loudspeaker, the Concept 20.

The Q Acoustics Concept 20 standmount speakers are £350/pair, due to be officially launched at the Bristol Show, and will come in white and black.

The company claims to have addressed the fundamental problem of distortion caused by resonance, with a completely new design.

The cabinets incorporate "Gelcore Construction". Described as "a cabinet within a cabinet" and promising ultra-low resonance.

Q Acoustics claims the design means a reduction in radiated power – which in turn leads to colouration – of more than -6dB to midrange frequencies. In the high and low frequencies, the effect is said to be even greater.

The product has a choice of two finishes, gloss white or gloss black, and has a UK suggested retail price of £350 per pair.

Q Acoustics will be showing off the Concept 20 speaker for the first time at the The Bristol Show (22nd to 24th February). The speakers are due on sale in mid-March.

See also: details and discounted tickets for the Bristol Show