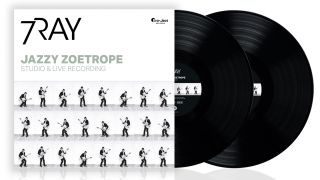 Created under the Pro-Ject Records Label, Jazzy Zoetrope is a 180g gatefold LP featuring Austrian musician and audiophile 7RAY, along with jazz trio Triple Ace and Simon Plötzenede on trumpet.

One disc is a live recording of the band captured at the Pro-Ject Headquarters. The other is an 8-track studio album laid down by the same troop at Studio Baumgarten, a special analogue hotspot in Vienna. The LP is for audio enthusiasts to be able to compare the results from the two different recording techniques.

The entire recording chain at Studio Baumgarten was kept analogue from start to finish. There was no compression or limiters used. Instead, the sound was kept at the mercy of the careful positioning of the finely-tuned microphones which included tube mic models such as the Neumann U47 and m49a.

The performance was recorded using an Otari 8-track tape machine and an old refurbished Acousta mixing desk. That was then mixed down, using a purely analogue process, to a 2-track on Studer tape machines and a CADAC studio console from 1974.

The live recording disc was captured at Pro-Ject HQ as a live stereo image without the use of monitor speakers in the performance which would otherwise cause cross-talk and interference which would affect the results. Buyers of the double album can listen for themselves to appreciate the differences in the final sounds.

Pro-Ject describes the work as an 'easy listen with great atmosphere' and an 'instant Jazz classic'. It's available on vinyl for £35 as pressed by Austrovinyl or as a ¼-inch SM468 master tape for £445 on two 10.5in NAB metal reels in 15ips speed, CCIR equalised.

The tracklist for Jazzy Zoetrope is as follows:

Studio Recording: Side B
1. I've Been Missing You
2. My Baby Just Cares For Me
3. Send In The Clowns
4. Nature Boy
5. I Remember You

10 of the most collectable (and valuable) vinyl records