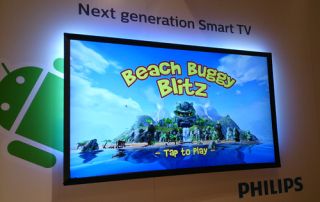 Philips is set to launch its first smart TVs powered by Android operating system in Q2 2014, TP Vision has announced at CES 2014 in Las Vegas.

The new Philips Android TVs – the first Android TVs from a European TV brand – will give users access to the Google Play Store and with it a huge selection of apps, games, music and movies, while also promising a "faster and more fluent TV and entertainment experience".

The Play Store and Android OS will integrate with a new Philips interface that will also offer the existing Philips smart TV offerings, from BBC iPlayer to Spotify and USB recording.

"Android OS helps with speed and performance… smart TVs need to operate the way a smartphone or tablet works. Previously our performance hasn’t been strong enough," he told whathifi.com.

We got a first look of the Philips Android TV in a briefing at CES and the interface certainly looked very slick, allowing us to play familair Android games with very little sign of lag, while also browsing the rest of the Google Play Store.

The layout, which TP Vision told us isn't the finished article, is a much easier to navigate interface than many previous Philips smart TVs with the addition of the familiar Google Play store app icon.

Click through to the Google Play store and the screen is identical to the appearance on tablets, though again, we're told there will be some more tweaks, such as the removal of the power icon.

The TVs will be powered by a "powerful quad-core chip", which promises to major on delivering big-screen gaming, which appears to be a real focus of the Android sets.

We enjoyed a quick play of some Android games using a standard Logitech wireless gaming control and the performance was impressive, while the Philips remote control also brought gesture control and promised Google Voice integration in future.

The first Philips TVs featuring Android are due in March 2014 in selected European markets and Russia, with the new TVs set to come to the UK later in the year.

We were told there would be no noticeable premium for Android TVs but that the OS would be predominantly on higher-end sets.

Maarten de Vries, CEO TP Vision, said: "In 2014, we will start the roll-out of Philips TVs featuring Android in the higher end of our product portfolio.

"We expect that consumer appreciation and take-up will rapidly grow. By 2015 already the majority of our Smart TVs will be Android powered."

Scott Housley, Global Head of Product and Strategy at TP, added: "We believe that Android... will seriously boost the Smart TV experience, bringing the speed and user friendliness on par with the experiences users get from their mobile smart devices of today."