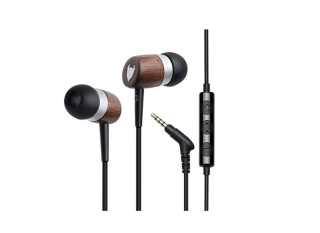 Graphene was first discovered at the University of Manchester in 2004 and is a Nobel prize-winning, naturally occurring super material. No big deal.

Nanene, then, is a few-layer version of graphene, produced in the UK using a patented manufacturing process. It is the only commercially produced graphene in the world that has been verified by the Graphene Council (yes, there is one) and crucially, it is not to be confused with graphite – a cheaper material with different properties.

Enter MediaDevil's CB-01 headphones, comprising a graphene-enhanced audio diaphragm which promises to improve both the high and low-end of the audio frequency wave.

Callum Bush, co-founder of the newly-formed British firm, is certainly confident, saying, "Nanene's properties enabled us to produce an earphone diaphragm that traditional materials would not allow."

We can't vouch for the sonic capabilities just yet, but visually the new MediaDevil CB-01 in-ears are devilishly handsome, with the devil himself depicted in aluminium at the end of the bud.

The outer housing is made from reclaimed luxury furniture wood, and the packaging is plastic-free. You'll get an iOS and Android compatible remote and microphone, a reinforced 36-strand copper cable with a reinforced 135-degree angle connector jack, and the earpieces connect magnetically to allow them to be worn comfortably while not in use.

Other neat features: the control hub integrated into the cable has a microphone, a click-command button and volume controls, which can also be used to take photos when your camera app is open. The click-command button answers and ends phone calls, and controls music and video playback (double press to skip forward, triple for back).

The MediaDevil CB-01 headphones are available on Amazon for a really-quite-affordable £50. Look out for our review coming soon.