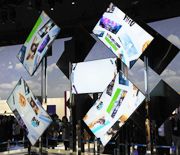 While its Japanese rivals are still struggling to turn their loss-making TVs divisions around, Samsung is expected to announce a huge increase in 2012 profits from its TV operations, according to Korean press reports.

With just over a week to go before the company makes a formal announcement of its figures for the final quarter of last year, and thus its whole-year performance, and with expectations high for a record performance in 2012 based on the company's estimates of sales of KRW56tn (£33bn) in the last three months of the year, it's becoming clear that the Korean giant's TV business made an operating profit of KRW2tn, or about £1.18bn, last year.

That's double the estimated profit it made from selling televisions in 2011, and is the result of Samsung's aggressive marketing and product strategy last year, which saw surpassing its target of selling 50m TVs in 12 months.

According to sources quoted by Korea's mk Business News, the final figure for the year is expected to be 53m TVs, of which 51.3m were flatpanel models – who knew Samsung made anything else these days?

While sales in the TV division aren't on the scale of the performance notched up by Samsung's mobile operations, which have played a major part in the company's record-breaking financial performance, it still contributed around 7% of the total operating profit.

The strong performance in the face of a contracting global TV market is also the result of Samsung's policy of targeting sales of premium TV models, which its announcements at last week's CES 2013 make clear it looks set to continue.

Designs such as its 85in S9000 Ultra HD TV (above) and F8000 LED TVs, along with enhanced Smart TV functionality, see the company placing itself at the top of the TV market, perhaps mindful of the competition from aggressive Chinese brands, which is expected to intensify in the next year or two.