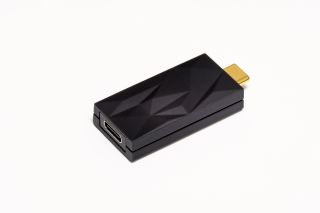 Calling all music lovers who use their laptop or desktop computer as their primary music source: is your computer connected to audio gear via a USB port – the universal interface that enables digital data to pass from one piece of hardware to another?

Well, that's both good and bad news. First, the bad: when used for audio, USB interfaces can be a little ‘noisy’. Electrical noise on USB signals can result in audio distortion, artefacts (such as clicks and pops) and latency – all things that can affect the performance of computer-based audio systems.

The good news? iFi’s iSilencer+ and iDefender+ promise to help, either by removing the electrical noise that distorts the audio signal, or by tackling the ground (or earth) loops that can cause an irritating buzz or hum from your connected speakers.

Drilling down into the issue a little more: USB interfaces can pass hi-res audio data at maximum resolution and allow bit-perfect conveyance of the original source data – ideal, on paper. In practice, USB is a complex, multi-purpose computer interface and not one that was created specifically for audio; it was designed to carry both power and data. As such, it is susceptible to electrical noise, not least from the computer’s power supply, which can adversely affect sound quality.

That's where British firm iFi comes in. The outfit, synonymous with affordable, portable DACs (that sometimes even look like hip-flasks), already makes dinky devices that enhance USB audio quality, with two of the most popular being the iSilencer and iDefender – thumb-size ‘sticks’ that plug into a computer’s USB socket. Now though, there are a few new kids on the block.

The new iSilencer+ (pictured above) sports several enhancements compared to its older brother. The circuitry has been upgraded with the addition of low-ESR (Equivalent Series Resistance) Tantalum capacitors for input and output filtering, which promise to further elevate its noise-busting abilities with a 10-fold increase in filtering capacitance.

The iSilencer+ now comes in three versions to include the newer USB-C connector: USB-A to USB-A, USB-C to USB-A and USB-C to USB-C, so Mac users are covered, too.

All versions support the ‘SuperSpeed’ USB 3.0 standard, together with USB 2.0 for backwards compatibility, and incorporate high-quality gold-plated connectors for optimal signal transfer.

As well as plugging an iSilencer+ into the active USB output between computer and DAC, iFi says more iSilencer+ ‘sticks’ can be plugged into spare USB ports to further reduce radiated EMI (you might get a few odd looks), and the iSilencer+ can be used between external hard drives and music servers, too.

The iSilencer+ promises to remove electrical noise (including EMI/RFI) at source, thereby enabling bit-perfect transfer of audio data to the DAC. It does this by combining passive filtering with iFi’s ANC II (Active Noise Cancellation II) circuit. Developed from military radar technology, iFi says ANC II works in a similar way to active noise-cancelling on headphones – it generates a signal identical to that of the incoming electrical noise but in the opposite phase, actively cancelling it out.

Along with removing noise, the iSilencer+ claims to reduce the occurrence of jitter – a form of digital distortion that impacts the sound quality. It also aims to re-balance the signal via iFi’s REbalance technology, ensuring that the digital signal received by the DAC is identical to the original source, no matter which audio format is being played.

While iFi says the precise effect of the iSilencer+ on sound quality varies from system to system, typically, you can expect to hear more clarity, greater dynamic extension and a more vivid and open presentation.

The iDefender+ (pictured, above) is a more specialised USB audio device than the iSilencer+, specifically designed to tackle ground (or earth) loops that can cause serious issues with some computer-based systems, typically resulting in an irritating buzz or hum from the speakers.

When plugged into the source device’s USB socket, the iDefender+ promises to detect whether there is a ground loop problem, caused by the presence of multiple earths that add noise. It claims to break the ground loop by ‘intelligently’ disconnecting the computer’s earth as well as eradicating audible ground-loop hum.

Like the iSilencer+, the iDefender+ upgrades the outgoing iDefender3.0 with the addition of low-ESR Tantalum capacitors for input and output filtering. It is also available in three versions to suit the connected equipment – USB-A to USB-A (pictured), USB-C to USB-A, or USB-C to USB-C. Again, the USB 3.0 and USB 2.0 standards are supported and the connectors are gold plated.

The iFi iSilencer+ and iDefender+ are available from Amazon and other selected retailers from today. Both are priced at £49 / $49 (plus tax) / €55. When we know availability and pricing in Australia, rest assured we'll update this page.

See all our iFi reviews