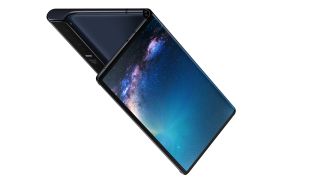 At Mobile World Congress 2019, Huawei has drawn the curtains on its new flagship Mate X, a 5G, foldable phone with a 6.6in FullView OLED display that unfolds like a book to a more tablet-like size of 8ins.

Similar in form to the Samsung Galaxy Fold announced last week, the 2-in-1 Mate X transforms via Huawei’s falcon wing mechanical hinge and remains only 5.4mm thick when super-sized.

The now familiar benefits of the dual-screen mean that in Split Screen mode, an image can be dragged to an email or memos can be written during internet browsing, say. And when unfolded, you have some serious screen real estate for movie watching.

A massive 4500mAh battery is bolstered by Huawei’s 55W SuperCharge charger, which can re-juice the battery from 0 per cent to 85 per cent in just 30 minutes.

The handset features re-designed Leica cameras, with the single trio of cameras on the back panel playing the roles of both front and rear cameras thanks to the foldable design.

The power switch is integrated into the fingerprint reader, and there is 512GB storage (expandable by Huawei’s proprietary nano card up to 256GB) and 8GB of RAM onboard.