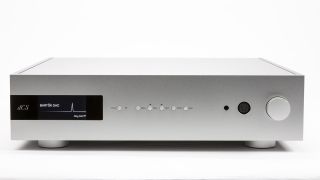 Replacing the five-star Debussy as the most affordable model in dCS’s DAC range, the Bartók (presumably a tribute to the late Hungarian composer) shares the same DAC architecture (the Rossini Ring DAC) as the Rossini model (£17,090) we not long ago awarded a five-star review to, as well as the same UPnP music streamer and the company’s latest-gen digital processing platform.

In addition to featuring asynchronous USB, AES and coaxial inputs, the Bartók can stream from a NAS drive, from music services such as Tidal and Spotify, and from Apple devices over Airplay - all over an Ethernet connection.

Supported file formats for streaming include PCM up to 24-bit/384kHz and DSD128, plus DSD in DoP format. The network interface can perform full MQA decoding and rendering, and in addition to user-selectable upsampling are several filters.

The DAC feeds balanced and unbalanced line outputs that can drive power amplifiers directly, negating the need for a separate preamp. And dCS has designed the Class A headphone amplifier, which dCS to work with both high and low impedance headphones.

The Bartók is also available without the headphone amplifier for £9999, and both versions will be available in late October.

MORE: 8 of the best DACs