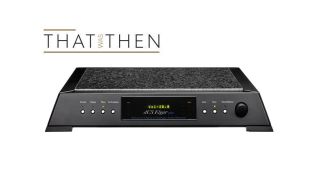 But back in the mid-1990s, things were different. The playback of hi-res music files was considered the cutting edge of technology, one that normally cost thousands of pounds to accomplish.

In 1996, dCS released the £8500 Elgar digital-to-analogue converter, claiming it was the first domestic high-end DAC capable of playing 24bit/96kHz files.

The Elgar was upgraded over the next few years to accept 192kHz music feeds and, in Plus guise (introduced in 2000), gained the ability to play DSD through the newly added IEEE1394 connection. The Elgar Plus stayed in production until 2007.

Never heard of IEEE1394? It’s a type of digital connection. At the time it was assumed it would become the default way to transfer encrypted DSD data streams between products.

If that upper limit of 24bit/192kHz sounds a bit basic for a high-end product, think again.

While current number-crunchers can routinely replay music streams with even higher sampling rates (384kHz is pretty common), look at the music that’s actually available and you’ll realise that such recordings are extremely rare. Even 192kHz files are nowhere near as plentiful as we’d like.

There’s no shortage of connectivity, even if there are obvious omissions by modern standards. The Elgar has coaxial in both RCA and BNC variants, opticals (a conventional Toslink and the rarely seen ST variety), a pair of AES/EBUs and Clock BNCs – the latter just in case you have a dCS outboard master clock handy.

Bluetooth was barely a thing back then, so its omission is understandable - and there’s no sign of the now commonplace USB-Type B.

Build quality is superb. Every panel lines up beautifully and the casework oozes substance and quality. The same can be said of the controls, particularly the rotary dial with its smooth movement and high precision feel.

Allen Boothroyd – the designer responsible for the look of Meridian products – did the original exterior design. While the appearance has dated a little, it’s hard to deny it remains clean and unfussy.

The LED display remains a model of clarity, even in a bright room. It’s limited in the amount and type of information it can show, though, which means it’s a pain to work through the rather comprehensive set-up menus.

The minimalist front fascia layout makes the Elgar simple to operate in day-to-day use, but feels clumsy when combinations of buttons have to be used to change the settings. But you’ll only really go through the whole set-up procedure once and then just dip in on the odd occasion, so it isn’t a major issue.

Our sample of the Elgar Plus comes straight from the company’s service department and works flawlessly.

We give it a few days to settle in before listening seriously. Our usual reference system of Naim NDS/555 PS music streamer, Gamut D3i/D200i pre/power and ATC SCM 50 speakers is pressed into service.

With a nicely warmed review sample of dCS’s excellent £17,000 Rossini DAC sitting beside it, the Elgar has it all to do to impress us.

It’ll come as no surprise to anyone the Rossini betters its predecessor easily. There’s simply more transparency and resolution with the newer product. Yet the two also share a common sonic signature.

While the Elgar doesn’t scale the same heights as the Rossini, it remains a detailed and controlled performer. By most standards it’s insightful, and renders instrumental textures and vocals nuances with skill.

Play a complex piece of music such as Stravinsky’s The Rite of Spring and the Elgar sounds firmly in command. We’re impressed by its composure and stability.

The music’s wide-ranging dynamics are delivered with grace, and there’s little sense of stress as things become complex.

The Elgar’s tonal balance is convincingly even, refusing to let any part of the frequency range dominate the proceedings.

There’s an enviable degree of refinement here too, with the DAC refusing to be hard or edgy when pushed by aggressive recordings. It remains a smooth and sophisticated listen regardless of the type of music played.

Some may want a bit more verve and bite when replaying the likes of Kanye West’s Yeezus or hammering out Bruce Springsteen’s Radio Nowhere, but there’s still plenty of appeal in the Elgar’s measured approach to music playback.

While we’ve heard older amplifiers and speakers that still charm by current standards, we’re surprised with just how well the Elgar stands up against the digital-to-analogue converters of today. It shows just how far ahead of the pack dCS was when the product was introduced.

Considering the company is still happy to service its early products, we see no reason to ignore the Elgar on the second-hand market. You’ll be buying a prize piece of digital audio history, something that, even today, can still be regarded as a good performer.