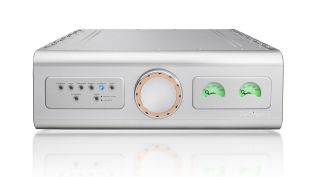 Built on a modular platform, the Progression Integrated also boasts an optional digital module that supports streaming via Tidal, Qobuz, Deezer and Spotify.

The Progression Integrated is equipped with efficient heat sinks reminiscent of the flagship Relentless Monoblock Amplifier to deal with the business of cooling, while two analogue meters, inspired by Swiss watch faces, function as signal level meters during playback.

Cleverly, when volume is adjusted, the meter needles change to volume setting indicators; after adjustments are made, the meters revert back to signal level operation. The meters also function as balance, phase and mute indicators.

The package comes with a Bluetooth remote that promises 'five times the range' of a typical IR remote, an iOS app to control your music library, plus support for music management software Roon. And MQA decoding is standard, so you all set to stream master quality tracks form the likes of Tidal.

According to Bill McKiegan, President of Dan D’Agostino: "The Progression Integrated adds another level of performance, feature set and pricing to our product line-up. It provides our customers an opportunity to experience a fully featured offering within the D’Agostino product line at a more attainable price point." Everything is relative...

Those with a few pennies saved can order the Progression Integrated Amplifier in four flavours: without a phono stage (£18,500), with integrated photo stage (£20,750), with integrated digital module (£24,000), or with phono stage and digital module (£26,250). Standard finishes are black or silver, though custom paint jobs are available upon request. At this price, we're not surprised.

D'Agostino's new power amp: relentless by both name and nature