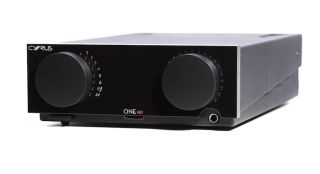 Any Cyrus fan will probably recall the One amplifier launched in 2016, as its contemporary aesthetics marked a departure from the brand’s more typical, rather agricultural look. So why the One HD so soon, you ask? Digital inputs.

While the One has analogue connectivity (including a phono stage) and aptX Bluetooth, the One HD expands on that with extra optical, asynchronous USB and coaxial inputs, linked to a 32bit DAC. The Bluetooth connectivity has also been upgraded to Qualcomm’s aptX HD specification.

The 100-watt-per-channel One HD is an addition to the One series, not a successor.

The MM phono stage, based on principles of the brand’s Phono model, is now on its own isolated circuit board - and Cyrus says every part of the amplifier circuit and linear power supply have been subject to a reworking. The in-house designed hybrid Class D amplifier, for example, has been upgraded to a fourth-gen example.

There are three line-level RCA inputs too, one of which can be set to fixed gain to allow integration with a separate AV amplifier.

The HD One HD is priced at £999, compared to the £700 price sticker of its sibling. So with more features and – fingers crossed – an improvement in sound, could this be the amplifier to finally challenge the Rega Elex-R?