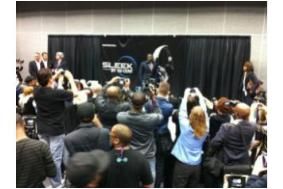 Launched by the Sleek by 50 Cent over the ear Wireless Hybrid headphones, the brand promises to develop in to a range of products to rival the Beats by Dr. Dre range with which it will inevitably be compared.

Curtis Jackson, the man behind the moniker, talked about planning such a product for some 12 months, insisting he wanted a product that offered something different; which he thinks he found with the Kleer wireless audio technology on show here.

The Wireless Hybrid headphones have a detachable cable, without which they can talk to a wireless transmitter - which connects to any device via 3.5mm-jack - over a distance of up to 60 feet.

The headphones are made from carbon fibre and aluminium, have volume and track controls on the ear, contain 50mm drivers and are rechargeable via microUSB.

No details on availability or pricing as yet but with 50 Cent's 'Get Rich or Die Tryin'' motto, we can only presume they won't be cheap...