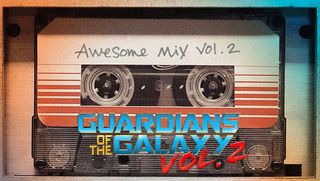 Cassette tapes are having a mini-resurgence. Sales in the UK in 2017 more than doubled, and 2018 sales are currently running at 90% up year on year, reports Official Charts.

Why? Who knows. Certainly a lot of artists are putting almost as much thought into their cassette releases as they are their vinyl releases. 2018's best-selling tape so far is Kylie Minogue's latest album, Golden, which came with a collectable, glitter-gold clear tape, while AC/DC's Record Store Day special release of Back in Black also makes it into the top 20.

Second on the 2018 top-sellers list is the Guardians of the Galaxy soundtrack, Awesome Mix 2 (with Awesome Mix 1 still at number 7), while albums from Snow Patrol, 30 Seconds to Mars and Manic Street Preachers also feature in the top 5.

This pales somewhat in comparison even to vinyl sales; some 4.1 million vinyl records were sold in 2017, bouyed by 'superfans' who spend more than £400 per year on records. Will cassette tapes find their own superfans? Maybe hi-res audio cassette tapes will make all the difference...

Hi-res audio - the science behind the numbers

The best-selling vinyl of 2017