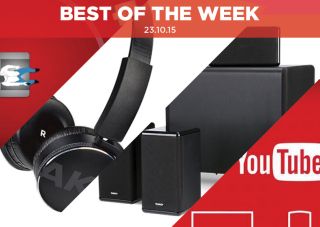 This week YouTube announced a new subscription service (YouTube Red), HTC revealed its latest smartphone (the One A9) and a new development may mean that we could see a 3D audio format fit for broadcast streams in the near future.

Reviews-wise, our test rooms were overflowing with products and services. We had a look at BBC's iPlayer service, had a blast with Tannoy's HTS-101 XP surround package and were stunned by Naim's ND5 XS streamer.

And don't forget, Awards night is only three days (and four nights) away…

MORE: What Hi-Fi? Deals of the week

MORE: 9 of the most memorable Sony winners

MORE: From CRT to VHS: the tech that got left behind

MORE: Behind the scenes at the Dynaudio speaker factory

MORE: A brief history of What Hi-Fi? Awards magazine covers

Launching next week, YouTube Red is the new service that will cover a range of video, music, gaming and original content.

HTC One A9 launches with new camera features and slimmer design

HTC has announced a new phone, the One A9.

The phone won't replace the One M9; instead it will sit alongside it. The A9 bears all the hallmarks of a premium phone with 5in Full HD AMOLED screen, a 13MP camera, along with the option of expanding the internal storage up to 2TB thanks to a SD card slot.

It'll be available in the UK from the beginning of November.

MORE: HTC One A9 launches with new camera features and slimmer design

READ MORE: HTC One A9 hands-on

The International Telecomunication Union (ITU) has announced a new audio format that means we could have 3D audio in the not so distant future.

Called Recommendation ITU-R BS.2088-0, it'll allow for "object, channel and scene-based audio" to be transmitted in one audio file, but you'll need a big amount of bandwidth to handle it if, or perhaps when, the audio format arrives in homes.

YouView to arrive on Sony Android TVs on 4th November

Is there a catch-up service better than BBC iPlayer? Not for us there isn't.

The latest iteration of the service shows how good it is with offline playback, a neat interface and a large collection of recent content available.

And it's all for free (if you don't watch live programmes). What could be better than that?

Tannoy has had great success in the past with its HTS-101 surround package and has decided to update the 101. It doesn't disappoint.

The revisions are minor but effective, the sound conveying the detail, clarity and texture of a soundtrack with great success. The integration of the sub is also fantastic.

If you're looking for a relatively inexpensive surround package, this Tannoy hits the spot.

Naim has been in the streaming business for some time and the ND5 XS is a great example of the company's talents.

It's easy to use, can support up to 24-bit/192kHz; its presentation is incredibly well-balanced and dynamic.

Whatever kind of music you throw at the ND5, it'll handle without complaint. It's a truly high-end streamer.

HTC One A9 hands-on