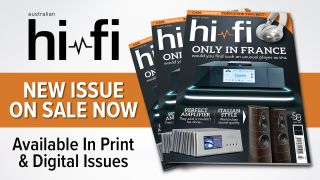 Check out the latest digital edition at Zinio

The latest issue of Australian Hi-Fi magazine is now on-sale and it’s packed with in-depth equipment reviews you can’t afford to miss, plus a factory tour of Hungary’s most famous amplifier manufacturer!

Here's a sneak peek of what's inside:

This issue carries the world’s first-ever magazine review of Sonus Faber’s latest Olympica Nova II loudspeakers, which also have a number of world firsts built in. For the first time Sonus Faber is building one of the three drivers in the Olympica Nova II completely in-house, in its own factory in Italy. Also for the first time, it’s using capacitors in the crossover network that were custom-made in the UK by specialist capacitor manufacturer Clarity Cap. Plus, there’s the latest iteration of a strange cabinet alignment called semi-periodic that is neither bass reflex nor infinite baffle that was originally pioneered by famous British speaker designer Ted Jordan when he was working for Goodmans.

Our review of the Boulder 866 is also one you won’t want to miss, because this is the amplifier everyone should aspire to own: it’s that good! And if you want even more value for your dollar, you can optionally add a DAC/streamer card to it that means it will do everything you want it to do, including being a Roon endpoint. Owners of the Boulder 866 won’t have to worry about speaker selection either, because Newport Test Labs measured its power output at more than 210-watts per channel into 8Ω and more than 400-watts per channel into 4Ω, plus it's unconditionally stable into even the most difficult loads.

Tired of CD players and DACs that all sound the same? Famous French manufacturer Metronome has gone out on a very long design limb with its latest CD player, the curiously named AQWO. For starters, it’s not just a CD player, it will also play SACDs. It’s also not just a disc player, but also a full-featured DAC with multiple selectable digital filters so you can match your music to the filter that suits it best, no matter what genre you’re playing. But the pièce de résistance is designer Jean Marie Clauzel’s inclusion of a dual-mode output stage that allows users to switch between valve and solid-state ‘on the fly’. And best of all, although it sounds identical to the $50,000 Kallista DreamPlay One CD player that’s also made by Metronome, the AQWO does more, and at a fraction of the price.

The Marantz HD-DAC1 is likely the best-sounding, best-looking, lowest-priced headphone amplifier/USB-DACs on the market at the moment, but it’s being shunned by headphone fanatics who don’t like the fact that its single headphone output is unbalanced, and also by audiophiles who think music doesn’t sound any good unless it’s in one of the super-high resolution PCM formats (352.8/384kHz) or DSD512 and beyond. Which is rather missing the point that if you don’t fall into either of these categories, the HD-DAC1 might very well be the perfect DAC/headphone amplifier for you! And Stephen Dawson’s tests prove that it’s one of the quietest DACs around.

Chario might not be a well-known name in audio, but if it continues to build speakers like the Constellation II Delphinus, it’s only a matter of time. Even before we received our sample for review, it had won the 2020 award from Sound+Image magazine in the ‘Best Loudspeaker of the Year $1,000–5,000’ category, despite it selling for only half the category’s price limit. Reviewer Andrew Leith found that their speed and dynamism were complemented by the superb warmth of the midrange sound, while Newport Test Labs’ acoustic measurements showed that its sensitivity was higher than that of most of its competitors.

iFi’s Zen Blue Bluetooth Streamer is a low-cost ($199), high-performance solution to turning your old traditional hi-fi system into one that can receive signals via Bluetooth from your smartphone, computer, or any other device capable of Bluetooth operation. And if you have a family who’d all like to send their music to the family hi-fi system, the Zen Blue will pair with up to seven different devices. But perhaps the Zen Blue’s biggest selling point is that unlike other low-priced streaming solutions, British company iFi has prioritised sound quality, with its internal DAC delivering superior performance.

Technics may be an unfamiliar name to our younger readers, but anyone with a few years on the clock will remember it as one of the power-house audio brands of the 70s and 80s. Back then, it was the high-end brand for Panasonic, which the famous Japanese manufacturer has recently decided to re-invigorate. In this issue we review the Technics EAH-F70N over-ear headphones, which are wireless with active noise-cancelling that is switchable and offers three intensity levels. They’re excellent headphones, but could they topple the two market leaders in this category? We reveal all in the May/June issue.

Heed Audio is Hungary’s most famous hi-fi amplifier manufacturer, established back in the 80s by Zsolt Huszti, who still owns the company. The amp maker has a history that’s as fascinating as its many models, most particularly its latest LaGrange unit. Australian Hi-Fi editor Greg Borrowman toured the factory in Budapest to bring you this exclusive story.

Have you ever wondered what type of equipment other hi-fi enthusiasts have in their homes? And why they purchased it, rather than something else? And if there’s any component they regretted having purchased… or discarded? Each month, we take you into a private home to find the answers to these questions and mostly manage to ask a few of our own as well. In this issue, we find an audiophile so keen on eliminating speaker cabinet resonances that he built his own brick enclosures which are now inextricably attached to the fabric of his home.

This issue, we redouble our efforts to bring you even more music reviews than ever before, with a Top Picks column dedicated to the best new Australian music, a Super Fidelity piece that identifies not only great music, but also music that will sound great on your hi-fi system, plus special columns dedicated to reviewing new and re-released titles in the rock and jazz genres… in other words, pages and pages of music you will like!

Australian Hi-Fi Magazine’s May/June issue (#513) is on sale NOW at all good newsagents as well as digitally on Zinio. For information on print subscriptions visit techmags.com.au.View Deal