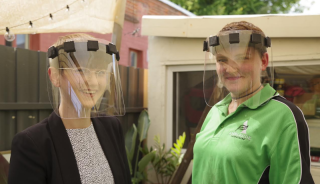 The two companies moved the project from concept to production in just three weeks and are currently in the process of delivering more than 50,000 face shields to South Australia Health.

In a nod to the all-Australian design and production, Kyron and ARID named their production company Ned’s Head, after Australia’s most famous outlaw, Ned Kelly, who created his own face shield from tin so he could not easily be shot.

“We initially wanted to help friends and loved ones working in retail and hospitality who were face to face with people all day,” said Lee Gray, co-founder and head of design at Kyron. “With all of our audio shows and demonstrations postponed, we jumped at the challenge to come up with an alternative design that could be manufactured and assembled locally in large volumes,” he said.

During the design process, Gray realised that people working in essential services did not have an option for a shield that allowed for facial expressions to be conveyed in face to face conversations.

More than 20 prototypes were built and evaluated with in-house and University testing conducted to ensure compliance with standards and suitability for intended use.

Manufactured in Adelaide, the Ned’s Head Face Shield is now being distributed to hospitals all over South Australia, and is already being used in medical practices, dentists, hairdressers, security firms and education facilities around Australia.