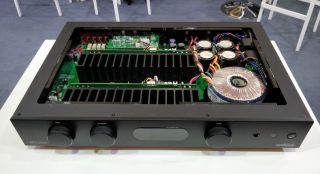 In addition to unveiling its first pair of headphones, Audiolab has also taken the wraps off a portable budget DAC and prototypes of a new range of hi-fi components at the Munich High End Show.

The 6000A (£600, pictured top) is the most affordable integrated amplifier Audiolab has produced in many years, and sits below the 8300A. It uses class A/B amplification and delivers 50 watts per channel, while the 32-bit DAC is fed by two coaxial and two optical inputs.

Connectivity also includes three line-level inputs, an MM phono stage, and aptX Bluetooth for wireless playback. The 6000A can be used in pre-power and preamp-only modes.

To complement the integrated amp, Audiolab has also included a CD transport in the range. The 6000CDT (£380) uses the slot loading mechanism first introduced in the 8300CD. The transport uses a digital buffering technique to reduce disc-reading failures, and the digital clock is controlled by a crystal oscillator to ensure the optical and coaxial outputs have minimal jitter.

The British brand is also using the Minich Show to introduce the latest (and most affordable) addition to its successful M-DAC family.

The M-DAC Nano is the smallest of the company’s DACs by a fair margin (it's no longer than a Wotsit crisp, as we saw on the show floor). Its aim is to rival budget, portable and mobile-friendly DACs from the likes of Audioquest and iFi.

We’ll have more information at a later date, but we do know that the Nano has a 3.5mm headphone socket, aptX Bluetooth and is likely to cost around £200.