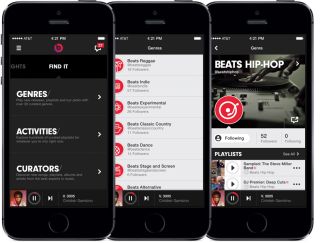 The Cupertino tech giant has been expected to launch a Spotify-rivalling paid streaming service since completing the Beats deal, with plenty of rumours suggesting what it might look like.

And now it appears we have some idea of how Apple plans to take on the streaming services at their own game - after 9to5Mac reported multiple sources with "in-depth details".

Apple's new service has yet to be given a name, but the most unsurprising detail is that the company aims to make full use of Beats Music's technologies and music content. The service is also completely designed in-house.

It's also believed that Apple is planning to "deeply integrate" Beats into iOS, iTunes and Apple TV – new Music apps complete with the Beats influence are being developed for multiple iOS devices.

The cloud-based service will base itself around your music library, with its search function allowing you find any song in the Beats catalogue to stream directly, and it will add it to your personal collection.

Elsewhere, it's predicted that you'll be able to select specific tracks to store on your devices or keep in the cloud. Beats' Playlists, Activities and Mixes features will also be carried across the service.

In terms of design, we're expecting to see the Beats black-and-red theme abandoned in favour of a new Apple-designed interface that fits more closely with iTunes and the iOS Music app.

Existing Beats Music subscribers will also be able to merge their accounts with iTunes or Apple ID profiles and migrate their libraries at the same time. Current iTunes features will also remain.

With Apple going up against some well-established services in the streaming market, cost is likely to be an important factor in gaining momentum.

Beats Music is currently priced at $10 per month or $100 per year, but sources have told 9to5Mac that Apple is looking at an $8 per month model – undercutting Spotify and many others.

And what about that all-important launch? Well, the March release predicted late last year now seems a little premature, so it's now thought that June's Worldwide Developers Conference is a possibility.