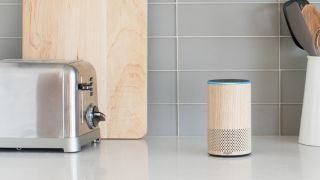 Amazon has filed a patent that would allow its Alexa voice assistant to respond no matter where you say her name in your command.

“Play The Lost Boys soundtrack, Alexa,” for example, would be just as effective as placing the wake word at the beginning of the sentence.

The technology described in the paper works by allowing Alexa to constantly record the previous 10-30 seconds of ambient audio to the device’s local memory and then delete it in a rolling process. If it detects the Alexa wake word, it can then use pauses in speech to find the start of the given command and respond accordingly.

This system means that these recordings would not need to be sent to the Amazon servers, thus reducing concerns over Alexa snooping on users’ conversations.

“The technology in this patent is not in use, and referring to the potential use of patents is highly speculative,” warned an Amazon spokesperson in a statement to Buzzfeed News.

While there have been plenty of patents from the likes of Apple and Google for technology that never sees the light of day, Amazon has a vested interest in constant improvements to its voice recognition abilities. Alexa has led the way ever since the launch of the Echo product line, and has become a gateway to selling customers many more of the retail giant’s services in the shape of groceries, music and more.

Though this particular technology should not mean any greater exposure to Amazon’s eavesdropping, the company’s privacy protocols are far from flawless. In May 2018, an Echo device accidentally sent a voice message containing a private conversation to one of the owner’s contacts.

The patent would allow users to reduce the recordings to a maximum of 10 seconds, but there’s no mention of whether the feature could be switched off entirely.

Those wishing to manage the voice data captured by their Alexa product should navigate to the Privacy section of their Alexa account within the settings menus.