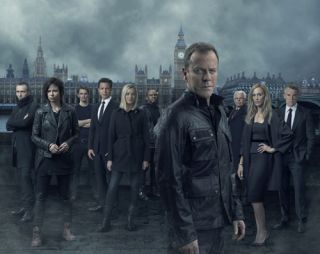 The following review of 24: Live Another Day does not feature any major spoilers.

Jack Bauer is back as 24 returns to TV screens in the 12 hour special 24: Live Another Day.

Sounding like a rejected title for a Bond film, we find Kiefer Sutherland's Jack Bauer in London as he attempts to foil a plot to kill the American President (on British soil).

Coming four years after an eighth season that left Jack turning his back on the US government after launching an assault on a Russian delegation (a Grand Theft Auto style rampage is a more apt description), our man no longer works for the American government. Rather, they have a warrant out for his arrest.

We find him sleeping rough in London as the CIA close in on his location which means that yes, Jack Bauer will not be pursuing suspects through Washington DC but through a block of flats in East London.

Despite the change in location, the familiar hallmarks of 24 are still present. The real-time aspect has been retained – although the series will skip time in-between episodes – and the iconic beeping clock and split-screens add to the feeling that little has changed. A good thing, we think.

24 has a certain formula and Live Another Day makes the best of it. If anything we're surprised by just how well the show settles back into its old groove.

It has always been a show with modern issues on its mind and that continues here with drone attacks, hacktivism and torture (again) on the agenda, as the writers attempt to make the show feel contemporaneous.

That's not to say that it is realistic. 24 is a show that wears realism on its sleeve before brushing it off when it suits the narrative.

It's a good mix with the new characters freshening things up and the more familiar faces adding depth which will no doubt be mined as the season goes on.

Sutherland is undoubtedly the main attraction of the show, his gruff, stoic Jack Bauer is still the glue that holds the show together and stops it from becoming ridiculous (so far).

Rajskub's Chloe does look like she came out of an audition from The Girl with the Dragon Tattoo but the rapport she strikes up with Jack is one of the defining elements of the episode.

There aren't many relationships that Jack has left intact, so it's nice to see Chloe and Jack team up, complete with some lingering conflict.

Michelle Fairley (Catelyn Stark from Game of Thrones) lining up as the season's villain (although we expect another will be waiting in the wings), marks something of a departure from previous seasons for the simple reason that, other than Nina, we can't think of another female villain in what has been a male-dominated show.

We like what we've seen from the first two hours. We've got some hope that it can help dim the memories of the last few seasons of 24 (especially season six). It's an exciting opening, full of dramatic action scenes, tense moments and some moments of intrigue and deception.

We're not sure what 24: Live Another Day can surprise us with considering the eight seasons and one TV special that have come before it, but, if it can regain the energy and unpredictability of earlier seasons, then this could be something very good.

Oh, and the fact that Stephen Fry is the Prime Minister in the 24 universe certainlygets our vote. Why can't real life be like fiction?

24: Live Another Day is now showing on Sky 1 HD every Wednesday.