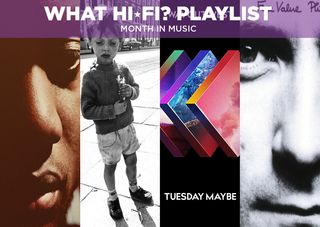 As much as David Bowie, Nina Simone, every Hans Zimmer soundtrack and late-80s spandex rock have become staple listening material at What Hi-Fi? towers, we're always eager to discover, or rediscover, new and old music – an easy feat nowadays thanks in no small part to music streaming services.

Every month, we’ll be (figuratively) opening our test-room doors to share what we've been listening to, and the new releases we're looking forward to hearing.

Turn Against This Land by Dogs - Andrew Murphy, staff writer

A conversation begun between Steve Waters (What Hi-Fi?’s photographer) and I on the train last week has rumbled on over coffee breaks and email chains about the UK’s early-to-mid-2000s indie scene.

At some point one of us mentioned Dogs. I think I first came across Dogs in the cellars of the Shrewsbury Buttermarket, which at the time appeared to be a relatively popular through-road for bands on those early tours (though maybe I’d already heard London Bridge on the radio by then).

For the sake of this we’ll say I saw them first, but the general point is: that was the night I decided they would be one of my favourite bands.

To call this a rediscovery is a bit of a stretch. I listen to some or all of Turn Against This Land probably every few months. But every time I do it takes me back to that gig – the way guitars spewed over each other and Johnny Cooke spat his words like he wanted to lamp someone – and the shared feeling that something was really happening again within British indie music.

From the songs to the artwork – I bought a t-shirt that night with similar black, white and red design to the sleeve, which I thought was just about the coolest thing I owned until our dog clawed a hole right through it – Turn Against This Land acts for me almost like a time capsule for that short-lived but fertile era. Yet it doesn’t seem to have aged a day.

View Turn Against This Land on Amazon

Music and TV are two of the world's favourite things - they certainly are mine. They go hand-in-hand with one another, as reflected in the recent Sky Atlantic/HBO miniseries Big Little Lies. Its opening theme song, Cold Little Heart, made an impression on me.

Performed by North London musician Michael Kiwanuka, it led me to listening to his gem of a debut album Home Again.

Kiwanuka’s vocals are no stranger to film and TV soundtracks, featuring in Disney’s Queen of Katwe, Netflix’s The Get Down and Showtime's House of Lies. He has a voice that could easily be compared to a number of the greats such as Marvin Gaye, Otis Redding or Curtis Mayfield.

Home Again was nominated by a number of awards organisations, winning the BBC’s Sound of 2012 poll. For an easy and relaxing listen, maybe even something to soothe the soul after a hard day, Home Again is most definitely one to listen to.

The casual sound of an electric guitar and sweet gospel voices will send you to a place of paradise. Could Kiwanuka be the one to revive British soul? I sure hope so.

I was too young to be cool in the 90s. So when Bristolian trip-hop band Portishead released their debut album Dummy in 1994, I was out of my depth.

Snatches of the Ike's Rap II sample flitted through the my consciousness whenever Glory Box was playing on MTV, but it was only recently – last winter, in fact – that I fully listened to the entire album. It’s 49 minutes of moody ambient sounds, gentle scratching and deep, deep basslines that completely take over your senses.

Listening in the dark, with the album on repeat, it coaxes you into a dreamy, languid world that reveals more layers and textures as you keep listening. Dreamlike, seductive and with just a hint of seediness – it’s the soundtrack to every dark, underground, smoke-filled club where people are simply too cool to dance.

Beth Gibbons’ vocals – delicate but intense – pierce through each song, giving them a more ethereal feel. Glory Box may be the catchy earworm, but Biscuit is the song that stands out for me. The crunchy layers, the brooding tone, Gibbons’ wailing that’s full of angst and longing and a hint of pride – it’s captivating.

Most of all, it just sounds cool. It’s a sliver of 90s subculture that manages to sound timeless. It’s the perfect chill-out music, ideal for rainy nights and that rare occasion when you can simply let the album play on repeat for hours and hours.

It’s so easy to dislike Phil Collins. That ‘man in the street’ schtick got tired pretty quickly, and no one wants their rock star to be a Tory.

His culpability in the public school dressing-up-box explosion that was Genesis isn’t easily overlooked either. And despite his obvious mastery of the drumkit, he’s responsible for that horrible gated reverb drum-sound pop music has yet to fully rid itself of.

But his 1981 appearance on Top of the Pops, in his vile tank-top and with his un-pop hairline, remains a prodigious memory. The long and brooding intro to In the Air Tonight, with its very modern sequencing and drum-machine sounds, with Phil squirming and twitching behind his keyboard-on-a-workbench and Marital Breakdown Signifier paint-pot nearby, meant I was all-but compelled to buy the album it came from. Or, at least, borrow it from the record library in the centre of Birmingham.

And despite its baggage, Face Value remains perhaps the best album I feel guilty about liking. There’s a lot of sophisticated misery (If Leaving Me is Easy, The Roof is Leaking, the truly heartbroken You Know What I Mean), some perky Motown-inflected pop (I Missed Again, Behind the Lines) featuring the Earth, Wind & Fire horn section, one hair-raising Muso Credentials instrumental (Hand in Hand) and a bit of simple fandom to finish off (Tomorrow Never Knows).

Throughout, it’s musicianly in the best way, awash with clever and interesting studio techniques, and features some unburstable melodies. Admittedly it led directly to Collins’ overarching grip over mid-80s pop, his appearance on Miami Vice and his attempt to hijack Live Aid.

But if you aren’t driven to a spot of air-drumming at 3:39 of In the Air Tonight then there’s something wrong with you.

Unbelievably, it’s been 20 years since Way Out West’s debut album provided the soundtrack to the summer of ’97 with its melodic house tunes and thumping club hits such as Blue, The Gift and Ajare.

It’s also seven years since their last album, We Love Machine. But while Way Out West's output has been less than prolific, Nick Warren and Jody Wisternoff have been otherwise occupied, taking their Global Underground and Anjunadeep label DJ sets to exotic venues around the world.

But now the Bristolian duo are back together to produce Way Out West’s long-awaited fifth album, Tuesday Maybe. True to form, this project has been a long time in the making – the title track has been around since late 2015 – so will it be worth the wait?

As a taster of what to expect, the three singles released so far cover the range of sounds for which the duo became known. The haunting melodies and hypnotic groove of Tuesday Maybe might have signalled a departure from the breaks and thumping basslines, but Oceans and The Call are both trademark pieces of emotive dancefloor music.

After the pop-driven disco-funk of We Love Machine, collaborations with Anjunadeep label-mates Eli & Fur and other female vocalists will raise hopes that Tuesday Maybe indicates a return to the sound that made Way Out West dance music pioneers in the early-2000s.

At the current rate, the next Way Out West album isn’t due to arrive until the mid-2020s. Fans should savour this one while they can.