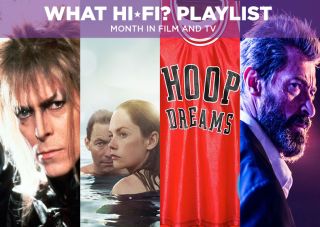 At What Hi-Fi?, we watch plenty of films when testing the latest in home cinema, but we're always keen to find new films or use old favourites that we know inside out.

MORE: The What Hi-Fi? month in film – January

It’s been 31 years since Jim Henson’s Labyrinth first hit our cinema screens, and for the 30th Anniversary last year, Sony re-released it on 4K HDR Blu-ray – scanning and mastering the original film in 4K, with a new Atmos soundtrack to boot.

What an absolute treat it is to see a film looking better than ever 30 years on. Lines are more tightly drawn, scenes have more depth and faces of puppets and people alike show more expression and detail than we’ve seen before.

It’s a credit to Jim Henson’s work that the occasionally unforgiving 4K resolution doesn’t show up any flaws in his puppeteering. If anything, his band of goblins now look even better and more engaging.

There’s an understandable amount of grain from the original film, but we’re glad it’s been left in. Not only does it give it some authenticity, but it also ensures we get to see all of the extra detail that can be found beneath it.

If you loved Labyrinth, you owe it to yourself to watch it in 4K. And like me, you’ll probably want to watch it all over again as soon as it's finished.

Okay, I'm no Marvel fan, in fact I barely know my Captain America from my Thor (that's the guy with the impractically large hammer, right?)

But having given in and watched Deadpool – not out of any newfound curiosity for comic superheroes, mind you, but rather for the Ultra HD Blu-ray format it arrived at our offices in – I was pleasantly surprised.

If you relish a curse-a-minute superhero more sarcastic than Chandler from Friends, and as-good-as-it-gets CGI action, all wrapped up in a sub-two-hour narrative as tight as Deadpool's spandex suit, this superhero – sorry, 'love' – story is suitably fun, violent and profane. (NB: it's not family friendly.)

Because of that, and the fact the film was finished in 4K, it's more than worthy of the UHD Blu-ray transfer. In 4K and HDR, the picture is an onslaught of colour and fine detail.

The vibrancy and textures of the red suit are impressive enough to awaken the fashion designer in you, and you only need watch a screen full of fire blazing vividly from above a TV's black bars (especially on an OLED telly) to see it's worth spending a tenner more over the standard Blu-ray copy.

What's more, the audiovisual treat is complete courtesy of a Dolby Atmos soundtrack, making it as worthwhile a watch for that fully-fledged Atmos speaker package you're about to buy as it is that brand-new 65in 4K telly you've just spent your life savings on.

Hoop Dreams is about the promise of the future and the disappointment of not making it a reality. That might make it sound as if this is a sober documentary. Perhaps it is, but it’s also a fantastic film.

The premise is immediately relatable - that everybody has the belief that they’re going to make something of themselves when they grow up. It’s no more apparent than with the two subjects of the documentary, William Gates and Arthur Agee.

Gates and Agee dream of making it into the NBA. Over the course of five years, Steve James and his cameras follow them as they progress through school and look to take the opportunities afforded to them.

However, that’s not what makes Hoop Dreams so good. It’s the revealing insight into the two boys’ home lives, the aspect of race in American society, the look at the education system, and drugs and crime in inner-city Chicago. It’s an all-encompassing look at the pressures these two kids face.

Perhaps the most inspirational moment is not from Gates or Agee, but from Agee’s mother Sheila who struggles with keeping a roof over her family’s heads (quite literally the lights go out). Despite an absent husband, she still manages to earn her nurse certification so she can provide for her family. It’s incredibly absorbing stuff.

It’s shocking that it wasn’t even nominated for Best Documentary in 1995 (only Best Editing). It remains a titan of the documentary field and one of the most influential documentaries ever made.

A simple story of boy meets girl? Not quite.

Season three of The Affair may have ended, but the aftermath of the liaison between Noah (Dominic West) and Alison (Ruth Wilson) continues to impact upon those around them. Since their chance encounter in an upstate New York diner, they have left a string of broken relationships, family feuds and a death in their wake.

First aired on Sky Atlantic in 2015, the Golden Globe-winning show has made for compelling viewing. The split episodes, featuring two different character’s viewpoints, allow a degree of suspense and doubt to creep into plotlines, as conflicting versions of events and imperfect recollections prove the adage ‘two sides to every story’.

But by series three, the show’s strong point has become a millstone. As Noah and Alison drift apart and their stories become less intertwined, it feels like two distinct shows. New characters are introduced and secondary ones sidelined, leaving the series feeling somewhat disjointed.

The focus is on Noah as he struggles to cope with his release from three years in prison, and his relationship with ex-wife Helen (Maura Tierney) and their children. Noah’s drug-induced psychosis and paranoia provides the plot uncertainties here, but it all ends with a fairly trite chance meeting with his estranged daughter while holidaying in Paris with new love interest Juliette (Irene Jacob).

Yet despite the minor plot flaws and contrived endings, The Affair has remained watchable throughout. Its portrayal of two sides of complex relationships opens a window into human fallibility, and often makes for uncomfortable viewing as well as gripping drama.

With a fourth series commissioned, the question is how the increasingly disparate strands can be held together. So far, The Affair has delivered, it just remains to be seen where it’s heading next.

View The Affair series 1-2 on DVD at Amazon

Despite being the poster boy for the X-Men film franchise, Wolverine's spin-off solo films haven't always hit the mark. But in Logan - Hugh Jackman's last time in the role of the gruff, cigar-smoking, adamantium-skeletoned, seemingly immortal mutant - it looks like we're getting something different from your standard superhero comic book film.

Inspired by the celebrated Old Man Logan arc by writer Mark Millar, Logan takes place in the future where there are no new mutants, with even Wolverine's powers waning. He and an ailing Professor X are living peacefully near the Mexican border, but their world is thrown into chaos by the arrival of X-23 - the first mutant in nearly two decades.

The trailer shows us a world-weary Wolverine, scarred and older. Patrick Stewart's Professor X is elegant and magnetic as always. But it's the look and tone of the film that has us excited.

It's not glossy and sleek like other X-Men films; it's a dusty, real-looking world that looks as battered and tired as our heroes. It's gritty. It's violent. There's a quiet menace and grown-up feel to the film that seems more interested in telling a story than relying on CGI effects.

Coupled with the R rating we've all been waiting for, and the poignancy of Jackman hanging up his claws after 17 years in this role, Logan could be the film to change the face of comic book flicks forever.