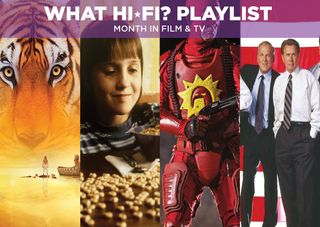 At What Hi-Fi?, we watch plenty of films when testing the latest in home cinema, but we're always keen on finding new films or using old favourites that we know inside out.

So whether it's the latest Hollywood film, a series on a streaming service or perhaps a demo disc that pushes your home cinema to the max, we've got you covered…

MORE: The What Hi-Fi? month in film

Matilda Wormwood is an exceptionally well-read, precocious six-year-old girl who can do large sums in her head.

But she’s stuck with horrible, TV-obsessed, corrupt parents who don’t appreciate or particularly like her, and she and fellow classmates are under the tyranny of the hideous and fearsome Miss Trunchbull.

Matilda’s telekinesis leads to fantastic slapstick-style gags that will have you laughing with glee: the newt that attacks Miss Trunchbull, her father’s hat being stuck to his head, children flying about, the breakfast scene, the chalkboard scene, the levitating water jug… the list goes on.

But what makes it so special is just how plucky and kind Matilda is regardless of her powers. Venting your frustrations by blowing up the TV with your mind is pretty cool, but even cooler is when Matilda cheers on Bruce when he’s forced to eat (as punishment) an enormous chocolate cake – that’s a real fist-pump moment.

Two decades later and the film remains witty, funny and delightful – and has some pretty tough lessons about family, adults and happiness along the way, too.

It’s one for kids and adults alike, and for adults to watch with kids, and then rewatch over and over again…

There are plenty of charming children’s films, but Matilda takes the cake.

View Matilda on Blu-ray at Amazon

There’s little argument that Life of Pi remains one of CGI’s greatest achievements to date, and four years on from its original cinema release, it’s looking better than ever.

That’s because this month, we got hold of the 4K Blu-ray of the film, and it’s nothing short of stunning.

Life of Pi might have been made for 3D, but it feels right at home with the extra pixels. The opening scenes, filled with flora, fauna and all manner of furry and feathered creatures, make this point immediately, rendering everything with better depth and definition than before.

HDR does a superb job here too, upping the richness of Richard Parker’s fur and adding punch to the luminescent jellyfish that appear against the deep blue sea.

The combination of the two allows better insight and immersion into this film than we’ve ever had before – and our original test disc is well worn to say the least.

In fact, Life of Pi in 4K has to be one of the most impressive pictures we’ve come across on Blu-ray so far, and it’s safe to say it’s a disc we’ll be revisiting regularly.

In light of Donald Trump’s ascent to the highest office in American politics, you’d be forgiven for thinking that the end days have well and truly arrived.

However, there’s always reason to be optimistic. When real-life politicians let you down, we can fall back on the fictional ones and Aaron Sorkin’s The West Wing has some of the best.

A fantastic TV show, The West Wing handled topics such as extremism, women’s rights, racism and religious persecution in a dignified and thoughtful way.

It tipped towards schmaltz on occasion, but there was a passion not only for its subject but also for debate. Issues were never just black and white. Conflict arose when characters had to navigate a grey area or understand a perspective alien to them.

The late John Spencer was the rock upon which the show was built, and Martin Sheen’s Commander-in-chief, Josiah J. Bartlett, always looked to inspire people. That didn't stop him from knocking a bigot down a peg or two (video above).

It left you hopeful about politics as a force for good. In the context of recent events, it feels even more relevant than it did 18 years ago.

James Gunn makes a lot of superhero movies with The Specials and Guardians of the Galaxy on his resume. But his best is Super.

Hitting the sweet spot between dark humour and tearful mundanity, we follow Frank Darbo (Rainn Wilson) who, when his wife Sarah (Liv Tyler) falls under the influence of a drug dealer (Kevin Bacon), pledges to fight evil as vigilante hero Crimson Bolt.

Just 44 seconds in, there's plenty of empathy for Darbo as he recounts his two perfect moments, which he memorialises in crayon drawings on his wall. The first is marrying Sarah; the second is pointing a police officer towards a grocery store hiding a petty thief.

He doesn’t get the ‘superhero’ ending – his wife leaves him for another man – but he gets relief from her happiness. By the end of the film, a wall that only had two drawings is covered in lots of little, everyday interactions that made Darbo happy because he made others happy.

Super is a film that reminds you of the pleasure that can be taken in even the smallest of good deeds – and maybe that’s a heroic action in itself.

View Super on Blu-ray at Amazon

TV shows The League of Gentleman and Psychoville opened doors to the perverse and comic minds of their co-creators (and stars) Reece Sheersmith and Steve Pemberton – but not quite so literally, or as explicitly, as dark comedy anthology Inside No.9 does.

The duo’s BBC-produced brainchild comprises of a half-hour, self-contained episode, each with a new story, new cast (only the writers are a permanent fixture) and new location. As the title suggests, the story is always set behind a number 9 door – of a gothic mansion, train carriage, call centre, 17th century court house…

With the first two series embracing inventive storytelling on macabre matters, such as death, murder and loneliness, Inside slowly unravels bit by bit. It never fails to wrong-foot viewers, to the point where you end up spending the first 25 minutes second-guessing the last five.

After the festive opening episode: a Hammer Horror-style parody of ‘70s TV melodrama called The Devil of Christmas, and the prospect of guest appearances from Fiona Shaw and Felicity Kendal to come, we have high hopes for the third series.

Is it an acquired taste? Most definitely, but one the show's fans will be able to experience soon going by the ‘early 2017’ release date.

And there’s even more cause for celebration: a fourth series has already been commissioned.

View Inside No.9 on DVD at Amazon