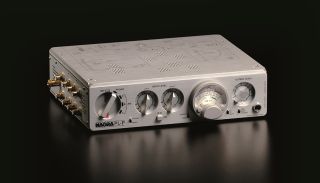 Swiss-brand Nagra was founded back in 1951. Over the years it has built an enviable reputation for cutting-edge portable tape recorders for the film, broadcasting and security industries, picking up multiple Oscar and Emmy wins for technical excellence on the way. Fittingly, the brand name translates to ‘will record’ in Polish.

It wasn’t until 1998 that Nagra launched its first hi-fi product, the PL-P preamplifier. Back then, it retailed for around £5700 ($9500), pretty much at the top of the tree as far as stereo preamps were concerned. This unit was unlike anything the high-end establishment was producing and borrowed heavily from the technology and aesthetics of the company’s esteemed recorders.

The most obvious link to those units was the use of battery power. There are eight rechargeable ‘D’ cells in the Nagra PL-P. The use of these batteries and some clever power-charging management gave the PL-P’s valve-based circuitry a clean power feed that was isolated from any noise on the mains. Each PL-P came with an intelligent outboard power supply that kept the batteries optimally charged in use.

That ultra-clean power supply was vital for performance, as the PL-P’s compact casework packed a switchable moving magnet/moving coil phono stage and transformer driven headphone output along with the line-level circuitry.

Despite a thorough manual, those new to Nagra won’t find the adjustments intuitive. But given familiarity, selecting the specific values needed and moving the various internal jumpers between the relevant connections is easy enough.

Nagra has always been a practical company so the valves used are common types rather than of the exotic, hard-to-get variety. Expected life is in the region of 5,000 hours, and unlike most similar products you don’t need to guess at remaining valve life. Nagra has fitted internal timers for both the phono and line sections to indicate how much use the valves have had.

The PLP’s headphone circuit is carefully considered. There is a dedicated, Nagra-made transformer for each channel and the circuit’s sound matches the performance we hear through the line outputs. We use Beyerdynamics T1s and Grado’s RS1s headphones without issue.

The company takes a great deal of care to ensure quality and, despite buying from top OEM suppliers, still rejects over half the valves it receives. A quick search reveals that a replacement valve kit for the PL-P runs to around £645 for the full set and £465 if you want to replace just those used in the line stages.

If that sounds a lot, the PL-P was an expensive product, and arguably one of the finest preamps available when it was introduced. It was so capable that Nagra kept it in production until 2012 – few hi-fi products stay in production and remain desirable for that length of time.

Connectivity is limited by modern standards. There are three line-level inputs alongside the switchable phono connections and two pairs of stereo outs. Those used to modern high-end equipment will be surprised by the lack of balanced connectivity – everything here is single-ended RCAs. Considering the company’s rich heritage in recording equipment, we’re not surprised to find a tape loop included. There are trimming potentiometers inside the PL-P to make sure the tape output signal level matches that of the source.

Unusually, none of the connections are on the back panel. In homage to its recorders, the company engineers decided to put all the inputs on the left side panel, and the outputs on the right. The only exception is the 6.3mm headphone output, which is on the front panel.

That front panel is a busy-looking thing. The trademark Nagra meter is another echo from the company’s recorders, but here it has multiple purposes. Used in conjunction with the pair of input level controls, the meter can be used to optimise the signal-to-noise ratio of the preamp. The dual meter pointers rest at the maximum signal peak for just a split second making it easy to adjust the input level to the highest value without reaching overload. This feature also makes it easy to level-match sources or even-out the channel balance.

Those input level controls can either operate individually or they can be mechanically linked, by a clever mechanism, to move in parallel. The meter can also be used to check the battery power level by moving the small toggle beside it.

That large input selector also doubles as the power switch. When an input is selected the appropriate valves are turned on, so only the line-level valves are used with such a source while all eight valves are powered when listening to records. It’s a good way to preserve valve life.

Overall build quality is as good as you’d expect from a high-end Swiss-made product. It feels luxurious in use and there’s no denying the quality of build and finish, both inside and out. The quality of internal components is exemplary and the circuit board is isolated from external vibrations with elastomer dampers. Our only complaint is that the output level control doesn’t quite have the well-damped, weighty motion we think it should have.

We try the PL-P with both our reference Burmester 911 Mk III power amplifier and a Gamut D200i without issue. This is still an insightful and impressively transparent performer, so you need to use suitably talented sources. We use our usual Naim ND555/555PS DR music streamer and a Roksan Xerxes X/Artemiz/ Van Den Hul Frog record-playing package to good effect.

From cold, it takes around 30 minutes before the PL-P hits its stride. Once it does, it is an immensely rewarding preamplifier to listen to. The best current designs we’ve heard – our reference Burmester 088 (£17,350), Aesthetix’s Janus Signature (£13,100) or Nagra’s own Classic Preamp (£14,500) among them – offer even more in the way of transparency, dynamic bite and rhythmic drive, but even in comparison to these, we find ourselves still charmed by the old-timer’s sonic elegance and naturalness.

Listen to Stravinsky’s The Rite Of Spring and the PL-P responds with a pleasingly convincing performance. Tonally, it’s pretty neutral, but also transparent enough to let the natural tonal richness and textures of the instruments flow through. This is a tidy, cultured presentation packed full of subtle detail and organised well. We’re impressed by the Nagra’s composure when the piece gets demanding and the way it can combine subtleties with a grand sense of power.

The PL-P’s stereo imaging is lovely and layered. Instruments are positioned with care and the sound stage is pleasingly expansive. It is able to communicate depth in a way that even some current high-end preamps struggle to deliver.

We switch to Mount The Air by The Unthanks and love the way this preamp conveys voices. Its mid-band performance is terrific, delivering delicacy and dynamic fluidity superbly. The backing instrumentation is rendered in a controlled manner, one that informs and emotes in equal measure. We are aware that this remains a highly detailed performer, but at no point does all that detail get in the way of our enjoyment. That’s a difficult trick to pull off.

Nagra’s current Classic Preamp manages exactly the same thing. The two preamps may be separated by two decades worth of development, but listen to them side-by-side and it’s clear that they share more beyond just that distinctive appearance. Both sound immensely natural and unforced, treading the line between informing and entertaining brilliantly. The newer product is clearly better though. It’s even more detailed and dramatic, and has a surefooted sense of timing that makes the older one seem just a little restrained.

But, that doesn’t diminish how much we like the Nagra PL-P. As we listen to a wide range of music from Stevie Wonder and Nick Cave through to Tchaikovsky and A.R Rahman we’re aware that the PL-P works its charm equally well across genres. Impressive.

The Nagra PL-P is over two decades old and remains lovely to use, delivering a performance that can still compare to the best preamps available. If anything deserves legendary status we think this unit does.