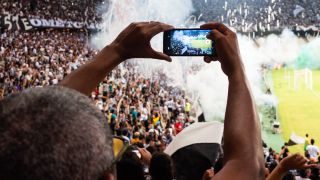 It's no secret, the Premier League is restarting. The action resumes tonight (6pm BST), with a round of two fixtures – including Manchester City vs Arsenal (at 8.15pm BST) – before a first full round at the weekend (starting 19th June). While all of the games will be played behind closed doors, the splendid news is that all of them will be televised on Sky, BT Sport, Amazon Prime Video and the BBC, many for free and the majority in 4K. If you need more details on this, our How to watch the Premier League 2020 for free and in 4K is the place to head.

For those of us well-versed on the return of the EPL, we've decided to create a quiz in honour of firsts within the realm of the English football broadcast.

It's multiple choice, although it's pretty tricky to nail down the answers. Your success will depend largely on your football history nous, your home cinema/radio setup and the channels you've subscribed to over the years. Basically, to get 100% you've got to be keen.

Of course, we could wax lyrical on the origins of the beautiful game 'til all 92 remaining Premier League matches are done and dusted and the trophy's been held aloft. Records trace football's history back more than 2,000 years to ancient China, but Rome, Greece and parts of Central America also have something to say about it.

Regardless of how football began, this is how it began being broadcast on radios, televisions, in Ultra High Definition, 8K, and in glorious immersive surround-sound. Whose form was the first to be seen wheeling away in celebration? Which tech giant was the first to help bring us live football in 8K? If you know, you know. And you should definitely play this quiz and prove it.

Just hit 'Play quiz' above and get clicking on those right answers. You only get one shot though, so think carefully. Oh, and there's a time limit: six minutes. It's a sprint lads, not a marathon...

Play another What Hi-Fi? quiz