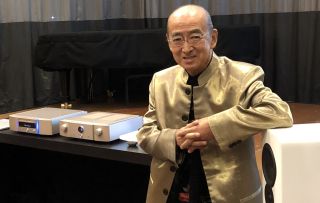 We can’t think of another hi-fi engineer with the public profile of Ken Ishiwata. After spending over 40 years at Marantz, he’s something of a celebrity, and is often mobbed at hi-fi shows with people clamouring for his attention.

His demos are rightly renowned for their obsessive set-up and unusual choice of music. While he’s known for his extrovert dress sense, it’s the quality of products he’s been involved with that have earned such respect.

KI Signature products have etched their way into hi-fi legend, and are the result of Marantz letting Ishiwata hone those products to his taste. Few companies give their engineers this kind of freedom or public exposure. With his time at the company coming to an end, we caught up with him (before the news broke) to get the inside story on a colourful career.

What Hi-Fi?: What originally made you interested in hi-fi?
Ken Ishiwata: I was learning to play the violin, and wanted to hear old master musicians like Jascha Heifetz and David Fyodorovich Oistrakh play. But the problem was that, at the time, hi-fi systems were too expensive to buy, therefore I had to build my own. I was 10 years old when I made my first tube mono amplifier.

What was your first job in audio?
I was radio communications officer on a commercial ship, but apart from seeing different countries, I wasn’t enjoying the job. Sony and Pioneer approached me at that time. They were looking for an engineer who could speak English, because they were expanding their business outside Japan.

Sony wasn’t looking for an audio engineer, but Pioneer was. That’s why I took the job at Pioneer, on the condition they sent me to Europe after a period of working in Japan.

What happened next?
At that time, Pioneer was purely an audio company, and together with Sansui and Kenwood, it was expanding its audio business worldwide. I came to Europe in 1968 and helped to establish Pioneer Europe in Belgium a couple of years later.

We helped develop Pioneer’s products by giving a European point of view. The radio tuner circuits produced here were better than what we were building, and we learnt so much from Braun’s designs.

Another important thing was safety regulations in the Nordic countries. They were strict, but good. This was an area where the Japanese designs were not strong and therefore we could help a great deal.

How did you end up at Marantz?
Actually, Marantz Europe contacted me in 1977, as they needed someone technical who also understood European business. I went there for an interview, but when I gave my conditions they said, "Mr. Ishiwata, you are too expensive for us." I didn’t want to compromise, so I went home and forgot about it.

A couple of months later they contacted me again and said, "We can’t afford to have you in the European organisation, but Marantz Japan still want you to join the company." After that, I joined the company in 1978 as tech/commercial coordinator.

What was your job at Marantz?
I was Brand Ambassador, but I was fully involved in product development and did the sound tuning of stereo electronics in my listening room in Eindhoven.

I also did presentations at hi-fi shows and distributor events. Those commercial presentations are always interesting because you get to interact with people who have different interests and tastes. We learnt so much from those encounters with end consumers. I enjoyed those shows and demos very much.

What’s the product development process?
Product development has changed a lot over time, especially from my early years at Marantz Japan. At that time we assigned each product to a specific engineer and I followed up with those engineers in every detail. Such meetings took up to two or three weeks, every visit we made to Japan (which was three or four times a year, depending on the number of products we were developing).

Today at Sound United (Marantz’s parent company), they do things quite differently since they have got both Marantz and Denon products to develop.

How do you choose the products that deserve the KI treatment? Is it down to marketing, or do some products lend themselves to upgrading?
You remember the original KI was the CD-63II KI Signature. We didn’t have any intention of making it at first, but the original CD-63II was a very musical player, and I was curious to find out its full potential, ignoring costs. Of course, at the time I wasn’t thinking we would actually put it into production. It was just an exercise.

I spent some time optimising it and finally when I felt happy, I demonstrated it to some people. They were all flabbergasted!  I knew it wasn’t a neutral sounding player, but it was so musical, you could enjoy listening to music forever with this player. I still get requests from people wanting one.

Which products have been the hardest to develop over the years?
At the beginning of the 1980s, Marantz became part of Philips. At that time I was developing all the speakers for the European markets and we were very successful, I must say.

The drive units were developed with a Japanese OEM manufacturer called Tonegen, and we managed to come up with some wonderful transducers. These were used in speakers such as the LD-50. However, since we became part of Philips they forced me to use Philips drivers, which weren't up to Marantz’s standards. I tried to refuse, but it was impossible, and so I had to come up with speakers using those drivers. Unfortunately, because of this, our speaker business went down.

The development work I had to do with Philips drivers was the most difficult for me. It wasn’t a pleasure working like that. Before Philips’s time, our peak speaker production was more than 260,000 units per year, all produced in Belgium. Can you imagine? If we’d have kept this speaker business then Marantz could be totally different today. I actually enjoy designing speakers, it’s a pity I can’t do that anymore.

Do you have a preference for DSD or PCM music files?
I’m sure you already know the answer – I prefer DSD! I’ve never been crazy about using PCM for music. PCM uses a constant number of bits and a fixed sampling rate – for example, 24-bit/192kHz. Every sample uses the full 24-bits, regardless of the requirement of the signal. I’ve long recommended the use of variable bit rates to avoid waste. As it is now, as much as 90 per cent of a 24-bit/192kHz data stream is wasted.

On top of that, the sound of DSD is close to the analogue original. That’s is why we decided to convert all PCM signals to (1-bit) DSD inside the DAC of our KI Ruby player.

Can a DAC’s sonic performance be judged from its specifications?
Unfortunately, specifications don’t tell you about sound quality. That’s not just for DACs, it’s for everything. Those specifications are all based on static measurements, but music is dynamic and there are many other parameters that influence performance.

The biggest problem of DACs of today is not their specifications. Those are all wonderful. If you only look at specifications, then you will feel confident it will sound good.

Back in the 80s, we had DACs using BiMOS technology, but today all the ICs are based on CMOS. With CMOS you can get high speed, low consumption and high specifications. Today’s handheld devices and computers require those things, but for serious audio? I have a big doubt.

Measurement or listening... which takes priority?
All measurements we do are static. Yes, they are essential to find out how amplifiers are working, but they don’t tell you about the sound quality. You have been in my listening room in Eindhoven. We’ve spent so many hours in that room listening and fine tuning all Marantz products. Sometimes that listening forces us to change our basic design, despite the fact that the measurements are okay.

What are your favourite Marantz products?
I believe you can already guess which products I would pick. Yes, my choice is very simple. It’s the KI Ruby SACD player and partnering amplifier.

The player has a unique 1-bit DSD processing technology that makes all types of music so enjoyable. The amplifier has a high-quality phonostage. You can use a turntable with cartridges as good as a Koetsu Red Signature or IKEDA 9C III moving coil cartridge and make the most of them.

What’s the first piece of music you bought?
My parents had a large collection of discs, so I didn’t have to buy many. But my first piece was David Oistrakh's Mendelssohn Concerto In E Minor.

What sonic qualities would your perfect product have?
It would have a rich and warm mid-band for voices and an amazing three-dimensional soundstage.

What’s the future of hi-fi?
As we are no longer bound by disc formats, I strongly believe we can improve performance. However, it won’t be easy to keep the standard of the original recordings high. We have to educate musicians to do that.