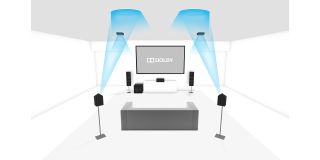 You really can have too much of a good thing. We’ve been champions of Dolby Atmos since the very beginning, and we love this ultimate example of surround sound cinema heaven. But suddenly, Dolby Atmos is everywhere. And while we love to see the standard supported by more and more home cinema amplifiers and speaker packages, its appearance on cheap soundbars, TVs and even smartphones has us worried – that’s not the Atmos we know and love.

After all, how can these products possibly deliver the true three-dimensional sound Atmos promises? And, if people believe that’s what the next-gen sound format is all about, what chance do we have to convince them that they can do so, so much better? This is why seeing the Atmos badge on anything and everything is no good thing.

Dolby Atmos began in cinemas, with Dolby calling it "the most significant development in cinema audio since surround sound” – and we wouldn’t argue. It expanded upon what had become the standard 5.1 and 7.1 surround sound formats to add height channels. Using speakers placed along walls and, crucially, in the ceiling, you really did have audio channels firing at you from every direction.

There are an incredible 400 speakers in what was the UK’s first Dolby Atmos cinema, the Odeon in Leicester Square (pictured above), giving a staggeringly immersive sound experience. If you’ve heard it in action then there’s simply no arguing that this has taken cinema sound to a whole new, brilliant level. This is what Dolby Atmos is all about.

Of course, most of us probably aren’t in a position to build a 400-speaker cinema at home. Nevertheless, bringing Dolby Atmos to the home in some form or other made perfect sense. Having created this clever technology, which could expand home cinema sound into a new dimension, why wouldn’t we want this tech to trickle down to things we could use and actually afford? Bring it on.

Atmos for the home arrived with certified AV receivers and the necessary content on Blu-ray, with the first Atmos disc to be released being Transformers: Age of Extinction in 2014. To enjoy the true effect you needed speakers in your ceiling. These are the crucial ones in our minds. And this is the third figure in a Dolby Atmos system: 5.1.2 denotes two ceiling speakers; 7.1.4 means four, for example. And we were very happy indeed.

If you didn’t have the ability or desire to put speakers in your ceiling, which is understandable, you could also explore the option of upward-firing speaker modules. These are placed on top of your standard surround sound speakers, and attempt to replicate the job of a ceiling speaker.

KEF, Elac, Elipson, Focal, Tangent and others all offer Atmos modules. And… we are sort of OK with that. It was, after all, more realistic and more affordable, and there was still logic to how these modules would offer more ‘height’ than standard speakers, due to the angle of the drivers.

But that turned out to be the tip of the iceberg. Dolby Atmos speaker systems and upward-firing modules were soon joined by Atmos soundbars. Now, can a single unit, placed horizontally under your TV, really deliver Dolby Atmos?

Think back to that 400-speaker cinema experience. While we know we can’t replicate that at home, for it to be called Dolby Atmos, we should surely get close. What would that mean? We think it means immersive, encompassing sound that comes from above as well as in front and behind. From a soundbar, that’s really tough.

We rated many of those Yamaha soundbars very highly, while always confirming they were an alternative to ‘true’ surround sound. A convenient and welcome addition to the market – but a compromise compared to 5.1 speaker systems.

Fast forward to 2020 and not only have soundbars improved with time, but you can also find any number of Dolby Atmos soundbars on the market – with the option to spend a little or a lot, and now including multi-room soundbars such as the new Sonos Arc. So these aren’t just offering surround sound but something, apparently, that can hold a candle to what Atmos promises to deliver.

The best we’ve heard, such as the Sennheiser Ambeo and the Sony HT-ST5000, really are impressive (and expensive) – and we’d heartily recommend them. But… we still wouldn’t say they match an Atmos system with multiple speakers positioned around your room.

That said, our real issue is with the cheaper models, which simply aren’t delivering anything approaching Dolby Atmos sound. One key factor is the lack of upward-firing drivers: if your soundbar doesn’t have these, it will be that much harder to replicate any height effect. So while Sony’s HT-ST5000, which has two upward-firing drivers, delivers the goods, the much cheaper HT-ZF9, which doesn’t have any, really doesn’t manage to do that. It’s a good soundbar but is it Dolby Atmos? Not in our book.

And this is the tip of the iceberg. There are now Dolby Atmos TVs from LG, TCL, Vizio and more, proclaiming Atmos straight from your TV’s speakers. Even tablets and smartphones now come with Dolby Atmos support. Will these products really “move sound all around you” and add “an overhead dimension”, two of the key pillars of Atmos according to the Dolby website? We’re not sure.

While we’re of course in favour of ways to hook new consumers into exploring and enjoying better quality sound, does a watered-down version of the technology serve the right purpose? Or does it leave consumers, who are unwittingly using a poorer version of the product, neither impressed by the tech nor inclined to explore the more advanced examples of the form?

Of course, this phenomenon is nothing new. From HD, to high-resolution audio, 4K and more, we’ve seen new technologies launched and then subsequently diluted – in part in the name of making them accessible, but often done in a way that’s unsatisfying, confusing and potentially damaging. Should high-resolution headphones really be a thing? Maybe you remember the confusion of HD Ready? What about 4K Mastered? We’re not sure any of this is helpful.

Dolby itself is no stranger to this technique. In fact, you can go back to the company’s beginnings for a good example. Released back in 1965, Dolby A was the first professional noise-reduction standard, and used four intricate filters to reduce unwanted tape noise. Naturally, Dolby wanted a version for home use: enter Dolby B, a much cheaper but also much cruder take on the original noise-reduction tech.

The true Dolby Atmos experience is grin-inducingly brilliant. If you haven’t done so yet, you really should experience a Dolby Atmos cinema. And we’re thrilled we now have the ability to bring some of that magic into our homes – the best home Atmos systems do just that, adding, literally, a whole new dimension to surround sound.

But that’s why if you do want Dolby Atmos in your home, we implore you to do so with the best possible products you can accommodate. Otherwise you aren't doing the technology justice.