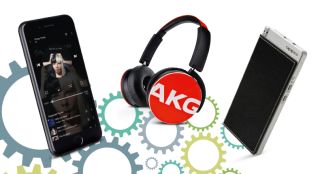 It would have seemed absurd, not so many years ago, that you could have high-fidelity sound on the bus to work by now, but never has pretending not to notice the colleague who just walked past you up the aisle felt so darn brilliant.

In terms of the systems we’ve put together in this series, this is the one you’re most likely already to own at least one component of.

We’ve used the latest Apple iPhone as an example, a smartphone renowned historically for the quality of its music playback, but the point is more that any phone can have its audio output markedly improved by the right external DAC and a talented set of on-ear headphones.

To that end, we’ve paired our phone with an Oppo HA-2 SE, the ‘special edition’ version of the company’s 2015 Award-winning portable DAC and headphone amp, and a pair of three-time Award-winning AKG Y50s. That’s a quite reasonable £340 on top of your smartphone contract.

The point of the Oppo in this set-up is essentially that it will take over from your phone’s inbuilt components for digital-to-analogue signal conversion and headphone amplification, following the general rule that a product focused on a specific purpose ought to be able to do it better.

Specifically, the HA-2 SE supports PCM files up to 32-bit/384 kHz and DSD 256, and can connect to Android smartphones, PCs and laptops via its micro-USB input, Apple products through a USB type-A input and 3.5mm jack for everything else that doesn’t have a USB connection.

And, because your phone battery likely runs from 100 per cent to empty within the space of a few albums, the fact you can charge it up from the Oppo is a tidy solution to arguably the most first-world of first-world problems.

If you’ve picked up our magazine or perused this website even semi-regularly over the past few years, you’re unlikely to be a stranger to the talents of the AKG Y50s.

Put simply, there are no better-sounding portable on-ears under £100. They’re detailed, dynamic and time exceptionally well, with an even balance ideal for highlighting what the rest of your chain is up to.

A quick blast of Joy Division’s Unknown Pleasures directly from the iPhone – well, through a Lightning-to-3.5mm adapter because of you-know-what – shows that refined, rhythmic sound that’s made Apple phones such a popular choice for music fans since day one. But we know it can be better. The question is: how much?

Oppo comes dancing in with the answer. If the clout of Stephen Morris’s drum kit, tethered to the ground by Peter Hook’s iconic bass lines, seemed authoritative before, the rhythm section that opens the album on Disorder is now positively dictatorial.

It’s tight, agile, and builds the sturdiest of platforms for Bernard Sumner to wash over with his soaring guitar line that spotlights the openness of the treble as it reverberates through the track.

Detail has never been in short supply on the iPhone, yet the Oppo manages to reveal even more, largely in the textures of those grime-drenched guitars that now take on extra dimensions.

Ian Curtis’s vocals, too, seem to be afforded a closer inspection in terms of dynamics and expression, the crux of his refined yet emotional delivery.

The HA-2 SE is really pulling its weight, and is showcased gorgeously by the honest presentation of the AKGs.

If you’ve a phone you love for all but its sound, or you just want its audio performance to be even better, this is a combination well worth trying out.