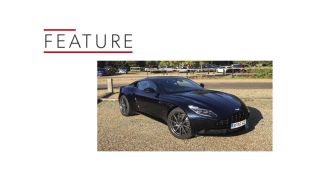 High-end hi-fi can come in all shapes and sizes – this particularly pricey B&O set-up just so happens to have 13 speakers, four wheels and a V12 engine attached. But did it leave us shaken or stirred? Read on to find out.

MORE: Behind the scenes with Bang & Olufsen and the new Audi A8

The DB11 may be Aston Martin’s grand tourer, but its sporty, compact interior doesn’t really leave much room to accommodate speakers. Still, B&O has managed to get the speaker count well into double figures. There are 13 in total, with each channel receiving amplification from the built-in BeoCore amplifier tucked away in the boot.

The majority of the speakers are fixed inside their own closed cabinets, giving them a dedicated, optimized environment within which to work. The large, chunky aluminium speaker grilles in the front and rear door panels highlight the placement of the midrange speakers in the front of the car and midrange/tweeter combinations in the rear. Each is laser-engraved with the Bang & Olufsen logo, though it’s difficult to see from a distance.

Each door also houses a 16.5cm woofer, which B&O does a great job of hiding away, and there’s a 20cm subwoofer between the two rear seats that fires out and into the cabin.

The party-piece of the set-up, though, is a pair of front tweeters. They use Bang & Olufsen’s trademark Acoustic Lens Technology and can be found on top of the dashboard in either corner. Hit the Start button and they rise dramatically up from the dashboard. Exit the car and they descend back into their housings, ready to surprise your next passenger.

Aston Martin’s new technical relationship with Mercedes-Benz sees a new infotainment system make its debut in the DB11. The fact it’s Mercedes-sourced is revealed by the tell-tale rotary control and touchpad combination - although Aston Martin has done its best to help it blend in by wrapping it in interior-matching leather.

The display is eight inches wide and perched up in the centre console. The screen does spoil the profile of the dashboard a little but doesn’t obstruct the view through the windscreen, unlike other set-ups we’ve seen.

Navigating the system and the audio options is a bit of a mixed bag. With no touchscreen to tap, it’s down to a combination of twists, swipes and clicks from the controllers. It does take a while to get used to – and even then, a lot of it feels a little unnecessary. We can’t help feel one control would do the job better.

As is the case with most premium in-car audio systems, B&O offers a handful of different sound modes. In the DB11’s case these are Driver, Front and Auto. As you’d expect, Driver skews the sound for the benefit of the person behind the wheel. All 13 speakers are adjusted, including the delays, so sound arrives at the driver at the same time. The result is a greater focus to the sound, and a more clearly defined soundstage.

Switch to Front and you can hear the balance change and the soundfield expand across the front of the cabin for the benefit of driver and passenger. Auto does exactly what it says on the screen – the car monitors how many passengers are in the car and adjusts the sound to cater for them all.

There are also settings for shifting the balance, plus tone controls and the facility to enhance or reduce the feeling of surround sound. You need to tweak the audio settings for each source, whether you’re listening to the radio or a smartphone plugged in via USB.

It works effectively compared with some systems we’ve experienced, where the adjustments aren’t especially subtle and can have quite a negative impact on sound quality.

Think of it like a TV’s ambient light sensor adjusting the picture for different light levels. The less obvious and distracting the changes to the picture (or sound in this case), the better.

Any audio system that has to compete with a growling V12 engine has its work cut out, especially in a cabin that you couldn’t really describe as library-quiet. But the BeoSound DB11 does a good job of cutting through the noise. It’s one of the most energetic and entertaining B&O in-car systems we’ve heard.

There’s a greater sense of attack and extra bite compared with the B&O system found in the Audi R8 Spyder, for example. Like any audio system, the B&O set-up takes a few tracks to get up to operating temperature. From cold, the system can sound a touch brittle, but it soon turns on the charm.

The acoustic lenses do a great job of delivering a wide sound with impressive dispersion. Listen to an orchestral piece, such as John Williams’ Theme From E.T, and the stage is opened up to the listener. There’s a remarkable sense of clarity and openness.

Strings display sharp, clean edges without sounding cutting or harsh, and all instruments are positioned in an organised manner. It’s easy to pick out individual instruments, but all the pieces fit together, the speakers working as a cohesive whole, following basic and complex rhythms with no issue.

Switch to Adele’s Hello and the system does a great job of contrasting the quieter verses with the powerful and commanding chorus. It communicates the black and white of each dynamic shift, but also gives equal billing to the grey areas between – testament to the amount of detail the system extracts from a track.

Lower down the frequency range, the BeoSound DB11 system delivers more than enough force to drive along Shelter by The xx. Again, the integration of the sub with the rest of the speakers is excellent – you can’t pinpoint its location, which is exactly what you want from an in-car system. It doesn’t boom, nor does it flap around uncontrollably when it has to delve down a few fathoms.

We’d like a bit more weight from the system, though. While it lavishes plenty of attention on upper-mid and high frequencies, we’re not confident we’re getting the full picture all the way down the frequency range. The inevitable noise generated by the engine, the road and the chassis doesn’t help either.

There’s also an issue around price. On Aston Martin’s Launch Edition DBS models, the B&O system came as part of the standard equipment. But if you were to spec a new car from scratch tomorrow, this system would set you back £5500. That isn’t a big chunk of the £160k asking price, and the system does leave a positive impression, but it isn’t completely flawless for the money.

Our test car also suffered from a rattling issue, which we tracked down to the aluminium grille in the passenger door.

Should James Bond be partial to a spot of music while on the Autostrada, the Bang & Olufsen BeoSound DB11 system will keep him entertained. It’s a capable and tempting package - although we can’t completely sign-off its license to thrill, it comes pretty close.