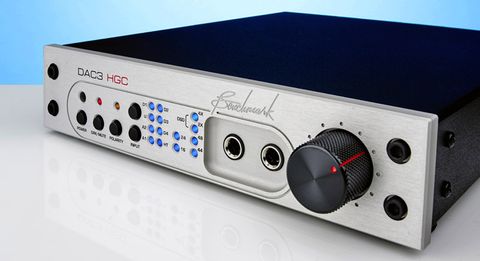 Say you want to buy a fridge. You walk into your local electrical retailer and look at the ones on offer within your budget.

After making sure it has a good Eco rating, you’ll probably open the doors, check out the space inside, wobble a few shelves and make your decision.

If it all looks and feels good you, like us, will probably buy it. And that’s without ever knowing whether it's actually any good at cooling food.

Perceived value counts for a lot, and sometimes no matter how well a product performs there’s every chance it’ll get overlooked in favour of something that looks and feels better.

In the case of Benchmark’s DAC3 HGC that would be a shame, because this really is a top-class unit.

We suspect that won’t be your first thought when you take it out of the box. We had to double-check the price, as the DAC3 looks and feels much more like sub-£1000 product rather than the premium-priced offering it is.

Judged solely on appearance and finish we doubt many people would take this over Audiolab’s £600 M-DAC, let alone the pricier M-DAC+.

The Audiolabs have crisper casework, clearer displays and smarter, more modern aesthetics. The Benchmark, on the other hand, lacks any hint of luxury. It reminds us more of lab equipment than premium hi-fi.

We may be off to a shaky start, but things improve once we delve into the details. This is a sensibly equipped digital-to-analogue converter.

It’ll accept all the standard formats, from 24-bit/192kHz PCM right through to DSD – that should be more than enough to cope with most people’s digital music collections.

While some rivals go even further in this respect, that added capability often seems more a matter of box-ticking than something of genuine use. Double speed DSD files and 384kHz, let alone 768kHz PCM recordings, are in extremely short supply.

We’ve got the HGC version of the DAC3 on test here, and it’s the best-equipped of the range. It has dual 6.3mm headphone outputs, a pair of analogue inputs and a variable output.

The presence of analogue line level inputs and a volume control mean this compact unit – about the size of a small hardback book – can be used as the hub of your system.

Digital sources are handled by USB (type B), a pair of digital coaxials and two opticals. The optical inputs are limited to signals of 96kHz, while the others can cope with 24-bit/192kHz. There’s a choice of balanced XLR and single-ended analogue outputs.

If you don’t need all that functionality, there are simplified versions of this product available: the DAC3 L (£2100) loses the headphone outputs while the DX version (£2200) drops the preamp features instead.

Look inside and things become even more interesting. Benchmark has never been shy about using the latest technology – seven years ago it pioneered the use of ESS Technology’s ES9018 DAC chip, since used in many highly rated premium digital products.

With this third generation DAC, it has moved to ESS’s latest, the ES9028Pro – an eight-channel, 32-bit chip. In the DAC3, its channels are grouped into sets of four to produce a stereo output. This configuration is claimed to reduce distortion significantly.

The initials HGC in the product name stand for Hybrid Gain Control. The volume control uses a clever design that works in both analogue and digital domains separately.

Digital signals are governed by a 32-bit dithered volume control, while analogue streams aren’t touched by the processing but remain in their native state throughout the product. The advantage is better analogue sound, in theory at least.

Elsewhere you’ll find the company’s HPA2 headphone amp module, which is specifically designed to have enough grunt to drive two sets of headphones concurrently, and has built-in gain adjustments to maximise performance with a wide range of headphones.

As further evidence of the attention to detail Benchmark’s engineers have lavished on the DAC3, consider those headphone outputs.

If the one on the left is used, the line outputs – both XLR and RCA – are muted, but the one on the right keeps everything active. We try both outputs and the unswitched one sounds a touch crisper.

The unit’s front panel is a mess of LEDs. There are seven lights to indicate source, one to show Home Theater bypass mode (where the line-outs are fixed at maximum volume), two for bit depth (16 or 24-bit) and another four to show sampling rate and DSD.

It could all be more clear, as Audiolab (for example) proves, but it doesn’t take long to get used to things.

While we like the feel of the knurled, nicely damped volume dial, the small black plastic control buttons don’t inspire and feel a little vague. Benchmark needs to do better here.

However, our irritation at the switchgear is soon swept aside once we start listening. As you would expect, a product at this level positively demands top-class partnering equipment.

We use our resident Naim NDS/555PS as a digital and analogue source alongside a MacBook Air (loaded with Pure Music) for USB duties.

The Benchmark is plugged into our reference Gamut D3i/D200i /ATC SCM 50 set-up, and connected to a range of headphones including Sony’s excellent MDR-Z1Rs and BeyerDynamic T1 Gen.2s.

Once up and running the DAC3 HGC is a hugely accomplished unit. Hans Zimmer’s The Dark Knight Rises (24-bit/192kHz) is a stern test for any piece of hi-fi, with dense compositions, wild dynamics, plenty of low-end action and a strong rhythmic foundation.

But the Benchmark responds with enthusiasm. There’s plenty of drive here, coupled to class-leading levels of insight and organisation.

We’re pleased with the DAC’s ability to deliver a huge and expansive soundstage populated with nicely layered instrumentation. It remains controlled and composed even when the music becomes demanding, yet uncovers a level of nuance and drama all but class-leading rivals such as Chord’s Hugo tend to miss out on.

Tonally things are well balanced, with no part of the frequency range gaining undue prominence. This is coupled to a good dose of refinement, so any aggressive tendencies in recordings, while revealed, are never overemphasised.

Moving onto Bruce Springsteen’s Radio Nowhere shows the Benchmark is happy to rock. It has a surefooted sense of timing and conveys the hard-charging momentum of the music well.

There’s plenty of attack here too, yet despite the bold presentation the DAC3 HGC never overlooks the subtleties. It has the finesse to render the passion in The Boss’s coarse vocals as well as resolve the sonic textures of the instruments used.

We move to the analogue inputs with a bit of trepidation. Traditionally, digital-biased products rarely do well with analogue signals - but the reality here is different.

Benchmark’s work with the Hybrid Gain Control seems to have resulted in a lovely, transparent performance that, if anything, sounds even more impressive than the number-crunching section.

There’s a high degree of transparency here, and a fluidity of dynamics few rivals can match. We enjoy everything from the relatively stripped-back charm of Aretha Franklin’s Respect through to Arvo Pärt’s haunting Tabula Rasa without issue.

Like all the best products, the Benchmark manages the difficult feat of stepping out of the limelight and letting the music take centre stage.

These results remain unchanged whether we use the Benchmark as a conventional line-level DAC or as a headphone amp. It is consistent regardless of set-up used, which is a testament to the precise way the company has developed this product.

While Benchmark doesn’t make many changes to the preamp section (compared to the DAC2 HGC), we’re more impressed by the way this DAC performs than previous versions. Close rivals such as Sony’s TA-ZH1ES struggle when asked to replace a dedicated preamp, but the DAC3 is happy to accept the challenge.

In absolute terms there is a small shortfall in transparency, drive and solidity when compared to dedicated units, but it’s not enough to dampen our enthusiasm.

The DAC3 HGC works well, and combined with a pair of quality active speakers would make for a wonderfully neat set-up.

The DAC3 HGC may not make a great first impression, but give it a little time to prove itself and you’ll find it’s an impressively capable unit – we can’t think of an alternative that does so much so well.

If your interest is digital-only there are similarly priced alternatives from Chord that are well worth considering. However, if you need analogue inputs as well, dive in. The DAC3 HGC is the one to go for.

See all our Benchmark reviews