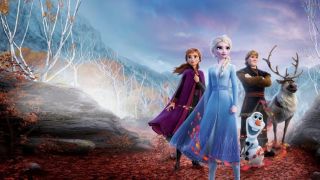 Disney Plus is the new streaming kid in town. It brings with it a huge back catalogue of Disney animated classics, as well as the iconic Star Wars and Marvel properties, which Disney owns.

But all of those are dwarfed by the juggernaut that is Frozen II. When it opened in cinemas at the end of last year, it had the biggest all-time worldwide opening for an animated film. To date, it has grossed over $1.45 billion, making it the second highest-grossing animated film of all time, and the tenth highest-grossing of any film, live-action or animated.

So to paraphrase Ron Burgundy, it's kind of a big deal.

And the good news is, it'll soon be available for viewing. Read on for how and when you watch Frozen 2 in the UK on Disney Plus.

When is Frozen II coming to Disney Plus UK?

Disney brought forward Frozen II's release date because of the coronavirus pandemic - it seems that the company thought we could do with some cheering up. It was released in the US on 22nd March, which was much earlier than originally planned.

It will be available on Disney Plus UK from 3rd July.

Where can I watch Frozen II?

If you can't wait that long, then don't worry. There are other ways to watch Frozen II right now, providing you're willing to pay.

It's currently available on the BT Film Store, Sky Store and Amazon Prime Video. BT charges £4.49 to rent the HD version, or £3.49 for standard definition. Sky will only let you buy it, for £13.99. But Amazon lets you rent or buy the HD version for the same price as BT and Sky.

It's also available on physical disc, both DVD and Blu-ray (it launched on both formats at the end of March). Amazon has the DVD for £9.99 and the Blu-ray for £14.99.

What other Frozen content is there on Disney Plus?

Frozen is one of the biggest film franchises in movie history, so naturally there's plenty of extra content surrounding it. And because Disney made the film, it's all housed on Disney Plus.

As well as Frozen II, you can watch the original Frozen to see what all the fuss is about. There's also a making-of entitled Into The Unknown: Making Frozen II, and three spinoffs: Olaf’s Frozen Adventure, Frozen Fever and Lego Frozen – Northern Lights. Plenty for Frozen fans to be getting on with.