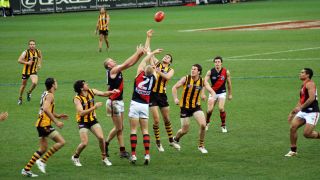 You might not have heard it but there is some live sport still happening. It may not be the Premier League, the Six Nations or the NBA but if you know where to look, you'll find live football, rugby and netball all still going on and ready to stream. Here's how to watch the live sport that's still happening. After all, we need our fix and there's only so much archive footage that one can stomach.

Some of it is available through subscription channels while other live sports streaming passes can be bought direct through their various associations. If you're stuck in a foreign country without access to your regular programming, then don't forget that you can use a VPN to get around the geo-blocking problem. Both ExpressVPN and PureVPN offer services.

Yes! Thank goodness for live football. There is one professional, national league still going ahead and it's right around the other side of the world...

Australia is holding on to its sports as long as possible and that includes the A-League, the country's premier men's football competition. The A-League is available in the UK on BT Sport and Bet365 and in an assortment of countries, including Germany, on DAZN which offers a free trial. Again, don't forget that you may need a VPN to watch if you're stuck away from your home in Germany.

In Asia, you can catch the A-League on beIn Sports and it's ESPN+ in the US.

While the league is all but done for the Australian women's league, there is just the one game left to play and it only happens to be the biggest one of all! Tune in on Saturday 21st March for the Westfield W-League Grand Final 2020.

The game is Melbourne City FC Women vs Sydney FC Women. Expect no love lost in this big city showdown. Best of all, the game is live and free. You can watch the Westfield W-League Grand Final 2020 right here.

There's not just some of the AFL to enjoy, there's all of it! The AFL season has just kicked off in Australia and, if you've never watched the sport before, it's the perfect time to get involved. There's little not to like about this physical contest of men in short vests and shorter shorts, world heavyweight mullets and some of the best umpire signals you'll ever see.

Australians can sign up to an AFL pass here to enjoy the footy live streams. Those in the UK and elsewhere will have to pay about twice as much for the same service here.

AFL games are also available on BT Sport in the UK. There's more information on AFL live streams wherever you are on this Reddit page.

It's Australia again that's holding out with the sport and that includes its NRL (National Rugby League). It's very early days in the 25-week season with plenty of rugby league still to play.

There are two free-to-air games every week on Australia's Nine Network. Australians will need a VPN to access those if they're away from home.

The NRL offers NRL passes for those outside Australia. Kayo offers cheaper deals for NRL, AFL and more for those who want access to all games within Australia.

Sky Sport also carries NRL games for the UK rugby league audience. The games are available on Sky Sport Arena. You can also get them on a pay-per-view basis on Now TV.

Grab it while you can but, for now, the ANZ Premiership is still on the road. For those who didn't know, that's the New Zealand Premiership Netball league which is contested by six New Zealand teams over 47 games in 14 weeks. Plenty of viewing.