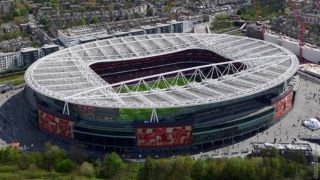 Arsenal have a slim but significant 1-0 lead as they host Olympiacos at the Emirates but the Greek side have lost 10 of their last 11 European away fixtures which makes things sound fairly rosy. All the same the Gooners will have to do it without defender Sead Kolasinac but Europa League secret weapon Bukayo Saka will fill in nicely. The left-sided player has the most assists in the competition so far with five.

Alexandre Lacazette was rested at the weekend for Arsenal's victory against Everton and the Frenchman should be raring to go. The Greek side will be wary given the striker's winner in the previous game. Doubtless veteran player Mathieu Valbuena will be running his socks off all night to put Mikel Arteta's team off their game.

Football fans in Austria, Canada, Germany and Japan get the chance to watch Arsenal vs Olympiacos for free. DAZN has the rights to show the Europa League knockouts and a whole host of sports in these territories, and, best of all, DAZN offers a 1-month free trial. So long as you've not used yours already, then you can fill your boots.

Arsenal vs Olympiacos live stream DAZN free trial
DAZN has the rights to the Bundesliga, UEFA Champions League, UEFA Europa League, US Sports, Fightsports, and much more live and on demand in Austria, Canada, Germany and Japan. Try free for 1 month. Cancel at anytime.View Deal

Sadly the DAZN free trial isn't available to those outside these regions. If you are a DAZN customer but travelling abroad, you'll need to sign up to a VPN service to make sure you can access the DAZN Arsenal vs Olympiacos live stream wherever you are.

It's also worth noting that there are free streams on terrestrial channels such Match TV in Russia, if that's where you happen to be. You can find a full list of the world's broadcasters with rights to show the live Europa League football here.

Watch Arsenal vs Olympiacos anywhere in the world using a VPN

Watch Arsenal vs Olympiacos live in the UK

Games in 4K are also available, minus the Atmos, for Virgin Media customers who subscribe to the BT Sport Collection. You can enjoy it in 4K HDR on channel 555.

BT Sport Ultimate is not available on the Sky TV platform but anyone with an Xbox, PlayStation, Apple TV or a Samsung TV can watch in 4K HDR using the BT Sport app with the BT Sport Monthly Pass for just £25. No contract required.

BT Sport Monthly Pass for £25 per month
Enjoy the Europa League, Champions League, FA Cup, Premier League and more in 4K HDR, all contract-free through the BT Sport app on games consoles, Apple TV and Samsung TVs. You do not need to be a BT customer and can opt out at any time.View Deal

Watch Arsenal vs Olympiacos live stream in the USA