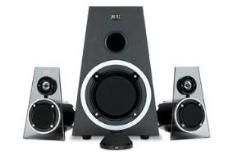 Altec's done a lot right here, but that treble's really rather wrong

It's no secret that vast swathes of the population are using their computers to listen to music and watch video. And that means desktop systems like the ambitiously monikered Expressionist Ultra are very much in vogue.

After all, have you ever heard a laptop's built-in speakers and been anything but horrified? Thought not.

The Altec Lansing is a fairly typical, but stylistically synergistic, 2.1 arrangement. The interesting bit is the controller – a twistable, dome-like device with treble and bass controls, and some rather hypnotic light patterns.

It's this little unit that contains the system's only input – a 3.5mm socket. Surely a USB connection should be included when you're spending £180 on a PC-friendly device these days?

Treble costs this system stars
Obviously that's more of a niggle than a full-fat complaint. We've reserved that for the sound. The problem is the treble, which manages to be both badly defined and harsh at the same time.

Play Just Jack's Embers and the delivery becomes rather unpleasant. Vocals are sibilant, unnatural and messy, while violins are uncomfortably brash.

And this is a Lossless recording; use lower bitrates, or stream content from Spotify or YouTube, and the problem's worse.

Impressive bass weight
And it's bad enough to ruin a performance that's otherwise very decent. Bass weight and depth are impressive, and yet the sub still manages to integrate seamlessly with the smaller satellites, leading to a tonally unified presentation.

There's good detail, timing and drive all-round, too, and the soundstage is surprisingly three-dimensional.

The problem is that it's really hard to concentrate on the positives when your ears are ringing with the negatives.