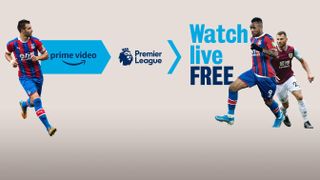 Amazon has the rights to air four Premier League football games for the 2019/2020 EPL season restart in the UK, and the good news is they're all free to air both on Amazon Prime Video and on the Twitch live streaming video platform too. Below we'll have all the details you need on how to access those streams.

Those in the US can't get those games for free but they can buy a season pass from NBC Sports Gold and watch every minute of all the remaining EPL games live for just $9.99! (Don't forget to use a VPN if you're a US or UK citizen stuck away from home.)

Take a look below and make sure you know how to catch the Premier League on Amazon Prime Video and Twitch.

All of the Amazon games in June/July 2020 will be streamed on Prime Video. All you need to do is log into the Prime Video app on your smart TV, mobile phone, tablet, games console or set-top box and select your match. You can also log in using a web browser on a laptop or elsewhere by navigating to the Prime Video website. If you can't see the live sport available, then make sure you update your device to the latest software version.

You do not need to be a Prime member for these games.

There's no guarantee of 4K coverage. Instead, the small print reads that "Prime Video will serve the highest quality streaming experience possible based on the bandwidth speed available". Anyone with a connection of at least 5 Mbps will get at least 1080p.

Viewers will be able to pause and rewind games as well as start from kick-off in case you happen to clip the beginning. Full match replays are enabled from midnight on the day of the game.

To switch on the artificial crowd noise, you'll need to select 'Stadium FX' from the speech bubble in the video player, the Audio menu on Fire TV or swiping down on the remote with Apple TV.

To watch the Premier League on Twitch, you'll need to sign up to a Twitch account and then navigate to the Prime Video Twitch channel.

UK Amazon Prime subscribers who are abroad, and wish to stream the Premier League on Prime Video, will find themselves blocked unless they use a VPN. It's only in the UK that Amazon and Twitch hold the rights for these fixtures, so trying to access from elsewhere in the world will not work.

Premier League restart rights in the US belong to NBC, CNBC and NBCSN and you can watch all the remaining games on NBC Sports Gold's Premier League Pass for just $9.99, including the games on Amazon and Twitch.

It's only available in the US, so any US citizen stuck outside their own country during the crisis will need to use a VPN to get access.

Premier League season pass $9.99 with NBC Sports Gold
Watch every single minute of the remaining games of the EPL 2019/20. This huge discount on the full package includes all live streamed games, on-demand replays from 9pm ET and a host of extra programming.View Deal

NBC Sports is available on a number of platforms including Sling TV and FuboTV, both of which offer free trials. Well worth trying them out and catching a free week of games at the same time.

The dates for the Amazon Prime Video/Twitch fixtures are as follows: