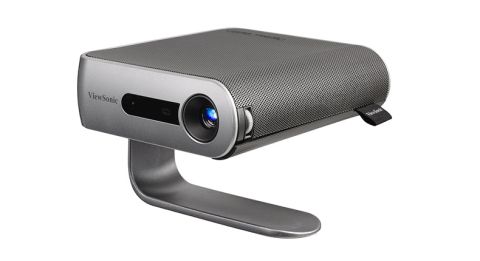 Low price, big picture - but not as capable as we’d like

What’s the best way of getting a large image wherever you want it? You could buy a 65in television and hire a group of burly people to carry it round for you, but we wouldn’t recommend this.

On the other hand, you could buy a portable projector. These have the benefits of being relatively inexpensive, fitting nicely in your bag and providing an image of up to 100in.

That’s what the ViewSonic M1 claims to offer, but can a great picture really be achieved for such a low price?

The M1 is a neat little device. A handle (which can also be used as a stand to prop the projector up) makes it easy to carry about.

When turned off, the stand covers the lens to protect it from damage - but the moment you uncover the lens, the M1 automatically bursts into life, which is a nice touch.

The buttons for menu navigation and volume are located on the back of the M1, but for the most part you’ll be using the remote. This is a mixed blessing.

While it’s responsive and moves through the M1’s simple menus easily, it only works properly when you’re sitting directly in front of the projector.

That’s because the receiver for the remote is on the front of the M1, so if you’re sitting behind it the projector has difficulty recognising your instructions. Since many people will use the M1 as a short-throw projector placed in front of them, it’s a little disappointing.

In addition, the power cable for the M1 is quite bulky – almost half the size of the projector itself – and doesn’t fit into the carry bag that is supplied. We have seen other small projectors powered by a MicroUSB cable, so the M1 loses some of its usefulness on the portability front.

You shouldn’t need to use the power cable that often, though. The M1 boasts a claimed battery life of six hours – around double that of the LG Minibeam PH150G and two more than the more expensive Nebula Capsule.

ViewSonic also claims 30,000 hours of lamp life for the M1, so you shouldn’t need to replace it until you’ve watched the Lord of the Rings trilogy at least 3000 times.

The ViewSonic also has more ports than any other portable projector we’ve seen.

As well as the HDMI 1.4 connection for Blu-ray or DVD players, the M1 also has a MicroSD card slot, USB type-A and USB type-C (so premium Android smartphones like the Pixel 2 or the Samsung Galaxy S9 can transmit video).

There’s also 16GB of on-board storage, which will hold approximately eight Full HD films (using Spider-Man: Homecoming as a point of reference). For those who still have 3D films in their library, the M1 will support those too.

With its 854 x 480 resolution, the M1 will constantly be either downscaling content (standard definition Blu-ray resolution is 1920 x 1080) or upscaling it (DVD is 720 x 480), which could potentially affect performance.

The M1 also has a claimed 120,000:1 contrast ratio and a 250 lumen output. This is better than some rival portable projectors, but far from what the best budget domestic projectors, such as the £500 Epson EH-TW5350, can offer.

Like many portable projectors, while the M1’s image is acceptable in dark rooms it has trouble handling subtleties in colour or insight in a given scene – and especially struggles in brighter conditions.

To its credit, it does have a vivid and rich picture that’s full of bright colours. Watching Mad Max: Fury Road, you can practically feel the heat radiating from the red rocks or the scorched metal of the lorry driving across the vast wasteland.

But those punchy colours lack sophistication, unable to render the range of hues in Max’s skin-tone or the way that the light plays off the water as it splatters into the earth. Rather than showing the particulars, this projector paints in broad strokes.

Moreover, while the M1 brings up an acceptable amount of detail for casual viewing, there’s a distinct lack of texture to the sand or Furiosa’s hair. Any attempt to eke more out of the projector by tweaking the settings simply ends up making the image oversharp.

Change to a DVD of The Truman Show and the result is similar. The M1 does better when fed a more natural colour palette, unlike the exaggerated warmth of Fury Road - but nevertheless the result is still overblown, with a distinct lack of detail.

For £200, this image is adequate as long as you use it in a dark room – bright lights will almost obliterate the picture. However, you may end up making more allowances for its vibrancy and detail than you might want.

ViewSonic has partnered with Harman Kardon for the speakers inside this projector and, while these work relatively well when it comes to voices, they find it tough giving a sense of space or detail.

With the dialogue-heavy Groundhog Day, the M1 handles the sarky quips of Phil Connors (Bill Murray) well, but it’s a challenge to make out any of the ambience. The sounds of cars or passers-by are also lost as the projector focuses on Connors and his old high school acquaintance.

We would recommend using the 3.5mm output to connect the M1 to a more powerful pair of speakers, but it’s a shame there isn’t built-in Bluetooth for a wireless connection.

The M1 has its plus points: a whole host of ports means you can get a picture from a range of sources, neat design makes the projector both portable and practical, and its simple menu system is easy to flick through.

Unfortunately the sacrifices in terms of picture quality and the smattering of design faults means, while this projector will fulfil the needs of some it’s not going to be topping our charts any time soon.

See all our ViewSonic reviews