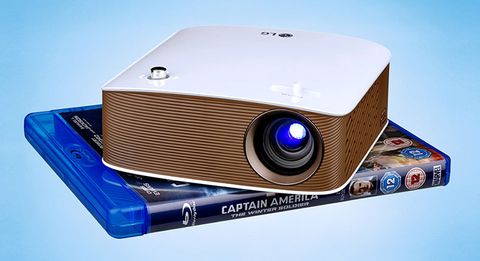 This projector’s poor image reproduction makes it a disappointing product, price notwithstanding

Imagine a projector the size of a couple of CD cases. Inexpensive, it connects to your laptop or smartphone and can deliver a 100in image at the drop of a hat.

Sounds almost too good to be true - and, unfortunately, it is. LG’s PH150G Minibeam does all these things, but the picture quality leaves us disappointed.

Measuring 12cm across and just 4cm deep, the Minibeam is one of the smallest projectors we’ve come across. It’s one you could easily slip into your bag.

Aesthetically, it looks good – the white finish on the top gives it an air of purpose, rather than one of a gimmicky gadget.

On its base is a threaded hole to attach the Minibeam to a standard camera tripod, which is helpful if you don’t have a spare flat surface to put it on or can’t quite get the height needed.

And it seems sturdy enough - although we wouldn’t make a habit of dropping it, of course.

The joystick feels tactile, sounding a satisfying click as you press it to turn the projector on or move it to navigate menus and control volume. That said, unless you have the Minibeam within arm’s reach it’s probably quicker and easier to use the remote.

For a product to be truly portable you should be able to connect it up in all situations, and it should last for a good while on its battery. For the most part, the Minibeam succeeds.

According to LG, it takes three hours to charge, and lasts for 2.5 hours - enough to get through an average-length film.

If you don’t have a connecting cable, the Minibeam can wirelessly mirror the screens of compatible Android devices – giving you quick access to apps and streaming services.

For iOS devices, though, your only option of connecting to the Minibeam is through a wired adaptor.

Also on the list of features is 'High Altitude' mode (for use above 1200 metres), and the Minibeam’s 'PJT' mode to flip or turn the picture if you’re using it behind a screen or attached to the ceiling. There’s an 'Automatic Keystone' feature too, to ensure you always get a square image.

After initially setting up the projector, we connect the Minibeam to our award-winning Sony UHP-H1 Blu-ray player.

Using a THX Optimizer disc we make the necessary adjustments to brightness and contrast, and go through various image-adjustment options – Black Level, Dynamic Contrast, Dynamic Colour and so on to suit our room. But we're unable to achieve the picture quality we’re expecting.

If you turn off all the lights and choose a film with few dark scenes, the Minibeam will give you a passable picture without any noticeable motion judder in big action scenes.

It’s not a noisy image either, so you’ll be able to play your DVDs and Blu-rays without having to fiddle with the noise-reduction settings.

But this projector can’t deliver vivid colours, and instead conveys them without the nuance or richness we'd like, even taking into account its price and portability.

Even during the bright scenes in Toy Story 3, Lotso’s purple fur is too dark and it’s a challenge to discern distinctions between shades.

It’s not a particularly insightful picture either, as a lot of detail is absent in the texture of clothes and hair. Increasing the sharpness to try and improve things quickly results in exaggerated outlines and features.

Peter Parker’s rooftop escape from a gang of thugs in The Amazing Spider-Man looks a little too much like a silhouette show.

And under brighter conditions, the Minibeam’s image is washed out to a greater degree than we find acceptable - it can be very difficult to make out much of the image at all.

On the audio side, Minibeam has a little mono speaker built- n but, as you would expect, it’s not a particularly dynamic or refined sound.

However, you can connect a pair of wireless speakers or wireless headphones to the Minibeam via Bluetooth, which makes for a bigger, more enjoyable sound.

Despite an attractive price and a number of features that, theoretically, would make it an interesting purchase, LG’s PH150G Minibeam projector simply doesn’t have the picture quality necessary for us to recommend it.

The shrewder move would be to invest your money in a traditional budget projector that will almost certainly will be more expensive and more difficult to transport, but will ultimately give you a better experience.