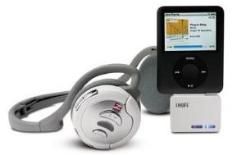 These Bluetooth headphones are a good idea badly realised

We're all for convenience, so Zoom's 4385 headphones look like a good idea even before they're out of their plastic clamshell.

Foldable, back-band wireless 'phones are always promising, and a transmitter to plug into your iPod sweetens the deal.

Bluetooth compatibility (for answering your mobile via the built-in mic) is another flourish.

Shame, then, that the 4385s are compromised in practice.

Heavy and fiddly in use
The design isn't uncomfortable but the earphones are irksomely heavy. Each earpiece also includes various ‘play/pause', ‘volume up/down' and ‘answer/hang up' controls, which are seemingly grouped at random and are fiddly to use with the headphones in situ.

Sound, too, bears criticism. Like Eric Morecambe when he claimed to be playing ‘all the right notes – but not necessarily in the right order', the 4385s deliver the relevant information, but do it in such a detached manner that they're a dull, uninspiring listen.

The 4385s could easily be better than they are.