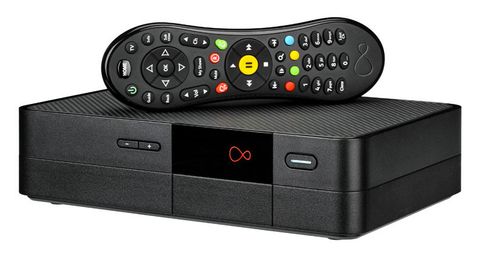 A good TV box held back by average TV content

Virgin’s TiVo PVRs were groundbreaking when they launched in 2010, merging hundreds of cable TV channels with the delights of on-demand and catch-up content.

But that was then and this is now, and TiVo is looking so long in the tooth it might be renamed Bugs Bunny. Netflix and Amazon Prime Video have long since made on-demand a bit old hat, and Sky Q has moved the goalposts again with its ‘Fluid Viewing’ and 4K football.

Virgin’s response? The Virgin TV V6: a 4K, HDR and Dolby Atmos-capable box that can do pretty much everything Sky Q can do, and more. Or at least that’s the promise.

If, in a parallel universe, there’s a beauty contest for set-top boxes then the V6 will be going home empty handed. It’s a drab, boxy affair, lacking the flair of either Sky Q or Virgin’s own TiVo devices.

It won’t look out of place next to your router, but if you’re placing it beside a sleek, sexy 4K TV, it’ll rather spoil the effect. Happily, you needn’t do that - because the V6 will work just fine in a cupboard.

The remote doesn’t require line-of-sight, so you can simply hook it up then hide it away. Its size will help on this front, too, because the V6 is a diddy little thing. Though a little taller than Sky Q, it’s much smaller all round, so finding a space for it shouldn’t be hard.

The remote is similarly compact, having been shrunk down from the TiVo version. It fits nicely into the palm, and does a decent job of placing the most useful buttons close to where your fingers naturally fall.

That said, we would have liked to have seen dedicated buttons to jump straight to apps and on-demand content.

The V6 is a well-connected box, with HDMI 2.0, both digital and analogue audio outputs and an ethernet port – which you’ll need if you’re to get the most stable streaming connection and to link the V6 with another Virgin box.

That’s something you’ll definitely want to do, because the V6 is every bit the equal of Sky Q when it comes to multi-room viewing.

The way it works is simple, but effective. You place a second Virgin box - either another V6 or an older TiVo - in a second room, then connect both to your network via ethernet. If you haven’t got the facility to link the boxes directly, you can connect via a Powerline plug or similar.

Once hooked up, everything you record on one box will be viewable on the other, via a folder within the My Shows menu. We’d have liked it if the recordings were merged together into one master list, but that’s a minor quibble.

More important is the fact that the connection between the two is rock-solid. In our time testing it, we didn’t experience a single glitch when going multi-room.

This set up works rather differently from Sky’s approach. With the Q, the extra boxes are mere streaming hubs that access the content on the main box.

But with the V6, both boxes have their own hard drive space, meaning that each additional box brings 1TB of storage to the party.

It also gives you extra tuners, though quite whether you need that many is a different matter. The V6 box itself can record six shows while you watch a seventh either from on-demand or your own recordings.

A second box therefore gives you another three or six tuners to play with, depending on whether you’re using a TiVo or a second V6. Got all that?

While the V6 might match Sky’s multi-room magic, it can’t compete when it comes to content. Ultra HD is the big loser here, with absolutely none of it available on Virgin TV itself.

Okay, so that’s not strictly true - you can get UHD via the built-in Netflix and YouTube apps. But then you’d almost certainly be able to get them via your 4K TV anyway, so that’s not in itself a reason to buy this box. And it’s not really Virgin’s content anyway.

Over on Sky, meanwhile, you can choose from 4K sport, 4K movies and 4K TV shows. And on BT you can also get football via the Ultra HD YouView box. Jealous much?

Still, we presume that Virgin will get some UHD content of its own at some stage, and when it does we expect it will look very pretty.

Netflix in 4K certainly does, with the V6 serving up bags of gory detail in the hilarious Santa Clarita Diet. One other thing to note is that in our testing, Netflix shows often still played back in HD quality to start with, rather than UHD.

It did usually correct itself after a few minutes, and was likely down to broadband issues, but given that we tested it on a 100Mbps line it was still a little frustrating. As well as offering limited UHD content now, the V6 will also be able to handle broadcasts in HDR once a forthcoming update arrives.

There’s no word on exactly when it will arrive, but Virgin says it is definitely coming. What’s more, it has confirmed to us that it is working with the BBC to support its proposed Hybrid log-gamma HDR format in the same release.

Outside 4K, things are a little more even between Virgin and Sky. There’s no Sky Atlantic, sadly, but you can get all of Sky’s Sport and Cinema offerings in HD. BT Sport is also available.

Virgin’s own offerings include up to 250 channels, among them the likes of Fox, National Geographic, Gold and Comedy Central. Catch-up is available on many of these channels, and can easily be accessed via the TV Guide: simply scroll back in time and if you see the little ‘C’ symbol, click on the show to view it.

It’s a nice feature and because Virgin streams its catch-up content, rather than forcing you to download it as Sky Q does, you can get watching instantly.

Virgin box-sets also contains a fair bit of good TV, with the likes of The Walking Dead and the US version of The Office available in their entirety. There are on-demand movies, too, but to watch these you’ll have to pay around £5 for a two-day rental.

The V6 is powered by TiVo, and because Virgin rolled out an update to the platform last summer, it will be familiar to any current subscribers.

The interface is built around the Home menu, which gives you shortcuts to catch-up, on-demand, apps and the rest. It’s mostly a text-based affair, although Virgin has tried to give it a lick of icon-based paint here and there.

It’s all a bit inconsistent, though: you sometimes find yourself moving from a big long alphabetical list into a row of icons and then back to a list of text.

Next to the likes of Netflix and BBC iPlayer it looks positively antiquated, and Sky has done a much more comprehensive job of bringing its platform up to date. On the plus side, it’s all pretty logical and easy to find your way around, and the Search function helps here too.

You can search for anything - TV shows, movies, actors, directors - and swiftly jump into watching something, or set up a series link to record it in future.

The results include content from every source, including on-demand, but that does mean it will sometimes serve up suggestions for things you can’t actually watch if you don’t have the relevant subscription.

One thing that is massively improved over the TiVo boxes is the speed of the platform. Where the older devices stutter and stumble as they move through menus and lists, the V6 races ahead.

There’s barely a pause as you jump from the Home menu to Catch-up and the likes of iPlayer and Netflix now load in seconds rather than minutes.

That said, we have experienced a number of lock-ups on the V6, with the box simply pausing and needing a reset to start working again. Hopefully it’s either not a widespread problem, or is something that a firmware update can fix.

Speaking of the TV Anywhere app, it’s a useful tool for getting a little more from your V6. You can use it to watch anything recorded on the box, so long as you’re on the same wi-fi network, or watch live TV and box-sets if you’re logged on to an external network.

If you want to watch recordings out of the house you’ll need to download them first, but note that not all channels are available for download.

The other big string to the V6’s bow is support for Dolby Atmos. We’ve spent enough time with Atmos to know that it has the potential to transform living room sound, so it’s exciting to see it available here.

Or rather it would be, were there any content that uses it. Yes, as with 4K the V6 can technically output Atmos-encoded audio, but doesn’t currently have any Atmos-supporting TV on the platform.

Hopefully some will arrive soon, but given that Sky is also going to be supporting Atmos soon, Virgin will need to speed up its roll out if it wants to stay competitive.

As it is, sound is restricted to Dolby Digital. Still, everything we watch during out testing sounds decent, with good clarity to speech and a fair amount of detail in music.

If Virgin’s prices seem more expensive than Sky’s on first glance, that’s because they include broadband too. You can’t actually get the V6 without it, which is both a blessing a curse.

On the plus side, Virgin’s broadband is the fastest around. Even the minimum-required spec for the V6 is 100Mbps, whereas Sky maxes out at 32Mbps. On the downside, you can use Sky with any broadband package, including one of Virgin’s.

What all that means is that the cheapest V6 bundle comes in at £49/month for the first year, jumping to £60 a month after that. But once you start adding premium content - Sky Sports and the like - it quickly gets more expensive.

Take every available channel plus a second V6 box and you’ll be looking at £120 a month once your first year is done.

You should also factor in an ‘activation fee’ of around £115, depending on how many boxes you take and whether you’re an existing customer.

The V6 is a frustrating beast. Hardware-wise it’s mostly good, and if it doesn’t quite beat Sky Q it’s a fairly close-run thing.

The interface could do with a further refresh and it seems a little prone to crashes, but it’s a notable improvement on the TiVo box. If you’re a current Virgin subscriber and intend to remain one, you should upgrade for the speed boost alone.

But it all falls down a bit when it comes to content. There are no Sky Atlantic-rivalling exclusives here, and you can’t even pay extra to get Sky’s best shows on your Virgin box.

What’s more, there’s no 4K content outside of Netflix or YouTube. If that changes, the V6 might well be a proper contender. Until then Sky Q still leads the way.

See all our Virgin reviews

Get TV V6 here from Virgin