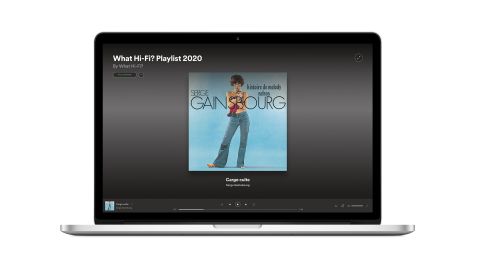 Despite competition getting its collective act together, Spotify's versatility and constant innovation keep it at the head of the pack

No one could suggest Spotify has reached its position of pre-eminence by accident. Not content with being the longest-running, most subscribed-to streaming service out there, it isn’t resting on its laurels even as rival services – most recently from Amazon and YouTube – constantly pop up to challenge its streaming supremacy.

The service is renowned for its innovation - if we were to revise this review every time a development (or rumour of a development) came forth, we'd never leave the office. And now Spotify is a listed company, it's more-or-less obliged to keep developing, keep innovating and maintain its market position. Shareholders tend to demand nothing less.

Music discovery is one of the areas where pretenders to Spotify's throne are made to look just that: pretenders.

It's not just with the power of its discovery algorithms that Spotify maintains its position. It's reduced the price of its Family Plan subscription to £14.99 ($14.99, AU$17.99) per month (for up to six users); it's matched with Tinder so you can see who shares your music tastes and have even more reasons to "swipe right"; it's also recently branched out into podcasts in a big way.

Despite competition, Spotify continues to stay true to its founding “music for everyone” ethos by remaining one of the only streaming services to still offer a free music app, alongside its premium service. And (perhaps unexpectedly) it occasionally throws a bone to its free-tier customers (those 150 million-or-so users who endure ads in order to enjoy the service gratis) with a much-improved mobile app experience.

At the time of our last review, Spotify’s catalogue had over 30 million songs – ‘significantly more than competing services’ we said, and more than you could ever listen to.

That figure is now up to something closer to 50 million, which is similar to the library size of rival Amazon Music Unlimited. Apple Music and Tidal claim to have 60 million tracks, Deezer quotes its figures at 56 million, Google Play Music and Qobuz are clocked at around the 40 million mark and YouTube Music is notoriously hard to measure on this front because it can play music from its enormous archive of videos too.

More recently, though, Spotify has focused on podcasts for its content growth. Since the acquisition of podcasting production specialist Gimlet Media in 2019, over 700,000 podcasts have been made available to stream and download on Spotify, including a raft of Spotify exclusives. And if that all sounds overwhelming, there a set of human-curated podcast playlists to help you find your new favourite shows with names such as 'Best Podcasts of the Week', 'Brain Snacks' and 'Crime Scene' - all self-explanatory and well worth delving into.

Arguably a better metric of the platform's growth are the numbers of paying subscribers and that's very much been on the rise too. By the beginning of 2020, Spotify had reached 124 million premium users, up from 70 million just 18 months before. In total, Spotify claims it has around 270 million active monthly customers.

That tells you two things: the majority of users take advantage of the free tier, but more and more are paying out.

MORE: 20 of the best podcasts on Spotify

The free subscription tier on the desktop version is pretty unlimited in terms of search and stream options. Of course, there are the adverts to be put up with, and they pop up every few songs. Sound quality is capped at 160kbps - but at least the Android and iOS app allows free users unlimited listening to as many as 750 tracks across 15 playlists each month. And that includes 'Discover Weekly', one of the real jewels of Spotify's music discovery algorithms.

There’s plenty more to persuade people to go Premium though: improved 320kbps streams, offline listening, the freedom to search and skip tracks on mobile devices and, of course, no adverts.

Spotify Connect, which allows Premium subscribers to stream its catalogue directly to speakers, TVs or stereos, is now a more attractive feature than ever thanks to it becoming a built-in feature in many hi-fi and AV products. On everything from Sonos multi-room speakers to Sony’s PlayStation, from Onkyo and Yamaha home cinema amps to TVs running on Android’s OS, you'll find Spotify Connect.

Connect is not a total shut-out for the Free listeners, though. Those on the no-pay tier can play Spotify through Sonos speakers, through the PS4 and one or two other devices as well.

Those who want to get the full Spotify experience have a few options. A standard, single Premium subscription will set you back £9.99 ($9.99, AU$11.99) per month, while a student subscription is available for half that.

Even better value is Spotify Premium Family, which gives Premium access to up to six people (nominally from the same household) for £14.99 ($14.99, AU$17.99) per month. That's a potentially huge saving. Spotify Premium Family also gets you a Family Mix playlist that combines music liked by all users on the plan, plus the option of Spotify Kids accounts, which serve up a range of audio content aimed squarely at nippers, including singalongs, soundtracks and stories, and also blocks out explicit content.

Spotify Premium Duo is a more recent subscription tier that's currently available in 22 countries (unfortunately not including the UK, US or Australia) and gives two people living under one roof Premium accounts for just 25 per cent more than the cost of a single subscription. With Premium Duo, Spotify also creates a special playlist, called Duo Mix, which combines music drawn from the tastes of both users.

Since as far back as 2017 there's been talk of Spotify getting a lossless music option called Spotify HiFi but, alas, it's still not materialised.

Better sound quality remains the next logical step for Spotify – not only do the likes of Amazon Music, Tidal, Qobuz and Deezer all offer music in lossless (and hi-res in all cases but Deezer), even Apple Music's compressed streams sound more open and involving than Spotify's.

Spotify’s intuitive interface looks much the same as before, although minor layout changes have been made to accommodate new features.

The Search page (Browse on the desktop app) is a well-maintained section that throws up playlists from various genres and to suit various moods. It has constantly updated UK and global charts and a 'New Release' area for your attention. Don't miss the ‘Concert’ section in amongst it all, which flags up gigs fitting with your music tastes and location. The same goes for the 'Podcast' tab which opens up a rich zone of podcast suggestions, genres and playlists to search through.

For more familiar listening, the Home page is where you'll find your current favourites and most played, as well as assorted compilations along the same lines. You won't find much new listening here but it's a handy welcome splash.

Music discovery through a series of personalised algorithmic playlists is at the forefront of Spotify’s innovation, though, and is essentially where the service leapfrogs its rivals. Head to the 'Discover' tab in the Search/Browse section for this.

Suggestions based on your recent listening activity are a good mix of both old and new – and are accurate. There’s now also more concentration than ever before on discovering new music.

There's a stack of complimentary playlists complementing Discover Weekly - and generally they all seem more-or-less spot-on, and even include new remixes of songs from artists you have listened to.

In case you need even more songs to soundtrack your procrastination, there’s also a New Music Friday UK playlist that ties in with the official UK chart, featuring a few handfuls of tracks from new album and single releases.

Listened to them all by Wednesday? Then take a deeper look within Search/Browse for more genre tabs and 'Mood' for a matryoshka doll of playlists and content. 'Romance', 'Indie' and 'Black history is now!' are among our current favourites. There are also some fascinating country-by-country selections under the 'Charts' tab (the Viral Top 50 of Turkey is a particular pleasure this week).

The more you listen the more they evolve… and the more we use them the more we think this is one of the really compelling reasons to choose Spotify as your streaming service.

If you'd like to use the Spotify desktop app to playback local files on your computer, then you can set them to pop up under the ‘Your Library’ section – just check that your preferences allow it – it’s not as well integrated.

Spotify’s algorithmic radio, which curates songs around a particular artist, is not a patch on Beats 1, Apple Music’s live 24/7 global ‘youth-orientated’ station, however.

That’s not surprising considering the resources Apple has put into securing DJ Zane Lowe and celebrity guest appearances. It is varied, unique and comprehensive, and ultimately one defeat Spotify has to take on the chin.

MORE: Listen to the What Hi-Fi? Spotify playlist

Still, in terms of accessibility, ease of use and content, Spotify has it all. Barring that lossless CD-quality audio.

It’s little wonder that competitors have come and gone in the time it’s been around, but even those alive and kicking don’t quite match Spotify’s level of completeness.

Sure, there’s room for improvement, and reasons why you might look elsewhere: some rivals sound better, some are available in more countries, and some features and functions offered by other services may appeal to you.

MORE: Amazon Music Unlimited vs Spotify: which is better?

With its CD-quality lossless streaming, Tidal is growing a fanbase of audio enthusiasts, while Qobuz’s Sublime tier offers something different with its cross between a streaming service and hi-res download store.

But Spotify is the mass market choice for those interested in discovering old and new music, and is the most comprehensive and complete we’ve come across for the money.

For some, it will come down to preference. Luckily, most services offer a free trial, so you can try before you buy.

But in our opinion, Spotify remains the £10 ($10/AUS$12) per month, standard-quality audio option to beat. But if your main concern is sound quality, both Qobuz and, even more pertinently, Tidal, should be considered.