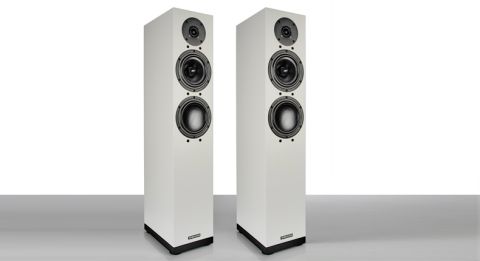 Another fine par of speakers from Spendor, but the A5Rs don’t quite deliver the all-round sonic quality we’d like

If your description of the perfect speakers includes words such as compact, floorstanders and unfussy, then you’re in luck.

Spendor’s new A5R could well be exactly what you’re looking for, particularly if detail resolution is high on your list too.

These floorstanders are small – just 83cm tall and slim with it – so they should blend seamlessly, even in smallish rooms. The clean-cut styling (something of a Spendor trademark nowadays) and choice of five classy but relatively low-key wood finishes help too.

Build quality is as good as we’ve come to expect from the brand. The A5Rs feel solid, with crisp corners and a sense of substance that isn’t always exhibited by a compact design such as this.

We particularly like the care taken over the spike mountings on the plinth, which has a thick metal plate in each corner to improve rigidity. The pay-off should be improved precision and dynamics.

In recent designs, Spendor has also moved away from biwiring, preferring the less fussy single-wire approach. We have no issue with this. It means that any budget for cables can go on a higher quality single run.

The bass output of the A5Rs’ 15cm polymer mid/bass is augmented by the Kevlar composite driver below it. This second unit comes into play only below 900Hz.

Unusually, there’s no reflex port, the cabinet being a sealed box. In theory, a sealed configuration gives more agile lows but usually sacrifices a degree of low-end weight and sensitivity in the process.

It seems that Spendor’s engineers have managed this compromise well, with the A5Rs claimed to reach down to 34Hz in a room and having a sensitivity of 87dB/W/m.

It’s designed for wide dispersion and is carefully time-aligned with the mid/bass driver to produce a more focused presentation. The crossover point between the mid/bass and tweeter is surprisingly high at 4.6Kz, which helps power handling.

These speakers aren’t fussy about positioning, and stay tonally balanced even when placed close to a rear wall. The wide dispersion means that it’s easy to get an expansive, well-layered soundstage without too much messing about with toe-in angle.

Once up and running these are pleasing floorstanders. There’s a lot of detail here, with the Spendors offering a great deal of insight into Beethoven’s Moonlight Sonata.

They define the leading and trailing edges of the piano notes well, delivering the dynamic variation with skill and intensity. There’s plenty of harmonic information here, and the ability to remain composed when things become demanding.

We’re impressed with the clarity on offer.

The A5Rs articulate nature is apparent on Gimme Shelter by the Rolling Stones. Here it does a fine job with vocals delivering a good mix of agility, subtlety and insight while keeping a firm hold on the music’s rhythmic elements.

There’s a decent amount of punch here, but not quite the natural richness and body we expect. The A5Rs have an analytical approach to music replay that delivers a lot of information but lacks a degree of verve.

Some compact speakers cover their tracks well, never highlighting the limits physics puts on them. The A5Rs aren’t particularly like that.

Up against rivals from the likes of PMC or ProAc there’s an obvious shortfall of authority and scale, particularly when playing more dynamically demanding music such as Orff’s Carmina Burana or Massive Attack’s Heligoland.

But make no mistake. These Spendors are capable, and right up there with the best of them when it comes to insight or agility.

We like their informative nature, but just wish they were a little more engaging, and well… fun.

See all our Spendor reviews