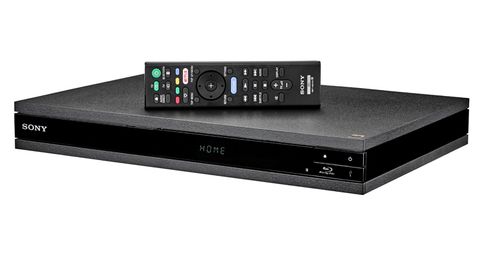 The title Blu-ray player doesn't quite do it justice. This Sony is a great all-in-one disc spinner, and more

There are certain items that have developed way beyond their original function, so that the description of them no longer seems apt. Take the petrol station for example.

That tiny oasis of convenience now has a lot more to offer than V-Power and diesel – you can also get doughnuts and Lucozade and sausage rolls.

That’s not far off the deal with the Sony UHP-H1. Sony has taken last year’s Award-winning BDP-S7200 and cranked it so hard that it is no longer fits in the usual BDP range of Blu-ray players. Instead it sits on top, like a resplendent quetzal.

So we’ll call it a Blu-ray player, but that’s unfairly reductive. While it can't microwave your sausage roll, it can handle almost anything you can throw at it, within the realm of sound and vision. Which is nice.

This is a fully certified high-resolution Blu-ray player, with wide format support that includes DSD 5.6, WAV, AIFF, ALAC and AAC audio files. If you prefer to keep things physical, don't worry: it has mad disc-spinning skills too and they expand beyond regular Blu-ray, DVD, DVD Audio, CD and SACD. It handles 3D as well.

Some TV manufacturers may have given up on the format, but for those who invested in 3D Blu-ray, Sony has got you covered.

The player can also upscale standard definition and Full HD video to 4K resolution, although it's not quite the same as a 4K Blu-ray played through Panasonic's DMP-UB900, or a dedicated 4K stream from the likes of Netflix or Amazon Instant Video.

Connections include the essentials: twin HDMI, plus outputs for digital coaxial, digital optical and analogue RCA. A USB port hides under a flap at the front and can handle hi-res files.

There’s Bluetooth output too, in case you want to spare your neighbours and use headphones. Sony’s proprietary LDAC codec promises to transfer three times the data as vanilla Bluetooth.

Online business is handled by ethernet and dual-band ‘super’ wi-fi, and you get the key music and movie apps: Spotify, Netflix, Amazon Instant Video and BBC iPlayer. DLNA certification means you can stream from networked storage devices, while the SongPal app offers multi-room audio.

What it does is as important as how it does it, and Sony says the UHP-H1 was designed with an emphasis on performance. To that end, the physical structure has been overhauled.

There is a high-rigidity frame-and-beam chassis, a top panel with a honeycomb structure, and an extra-rigid disc drive – all to minimise unwanted vibration and jitter. It doesn’t feel right to slice our review machine open, but it certainly feels more solid than the typical £400 Blu-ray player.

Does it work? It’s hard to point out a direct correlation between the physical tweaks and the performance, but we can say the UHP-H1 is one of the best Sony Blu-ray players we've seen – high praise considering the countless Awards we’ve given Sony for its Blu-ray players alone.

We stick on a Blu-ray of TT: Closer to the Edge, and are greeted by the sort of energy we’ve grown to expect from Sony’s Blu-ray players. The sound is agile and full of power. As Guy Martin tears down the track, we’re treated to strong dynamics and precise effects placement.

The raw energy of his (way too fast) bike is palpable, really conveying the madness of the Isle of Man TT race. Skip to the slower, talking scenes (it's a documentary, after all) and the Sony handles dialogue with finesse. Voices are subtle, full of texture, and conversations sound natural.

So far, so typical of Sony’s Blu-ray players, but we note an extra authority to the sound, which we usually associate with Panasonic’s approach. There is more weight to the sound, making for a more rounded performance.

Visually, it’s good news too. In the past, Sony has demonstrated a subtle approach to colours, which one could accuse of being a little underdone. With this player, the colours are still neutral and convincing, but they’re also rich and attractive.

It’s a sharp picture too, with the good sense of stopping short of looking overly processed. It’s a natural performance, easy to watch without distraction.

Sony wants this to be your audio player too, and we’re pleased to say the UHP-H1’s music-only performance is very good for a Blu-ray player.

There is a real sense of space; instruments are given room to breathe on a well-organised soundstage, without being cramped and closed in. It’s packed full of energy and agility, which makes for an engaging, entertaining listen.

Dynamically, it handles the challenging shifts that Pharrell Williams and Daft Punk are so fond of, and there’s plenty of fine detail too.

At a push, we’d say it doesn’t have the level of subtlety demonstrated by a dedicated CD player like the Marantz CD6005 – but it does better than any Blu-ray player we’ve heard for the money.

With the UHP-H1, Sony didn’t set out to make just a Blu-ray player. The company wanted to make a one-box offering that can juggle multiple tasks and leave you with one convenient box to contend with.

We think that mission has been accomplished with gusto. This is one of the most talented multimedia players we’ve seen for the money. Well done, Sony!