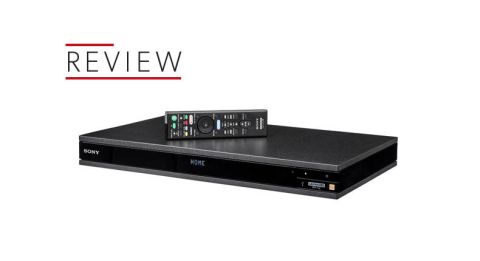 The phrase ‘pushing the envelope’ has nothing to do with post, or stationery for that matter. It originally referred to the ‘flight envelope’ – the upper boundaries at which it is safe to fly – speed, engine power, manoeuvrability, and so on.

But having since come to mean going beyond your limits, it’s a particularly apt phrase to describe Sony’s latest Blu-ray player the UBP-X1000ES.

At £725/$500, it’s a premium product by anyone’s standards, but Sony is certainly pushing the envelope to make sure this player gives you the best performance possible.

The UBP-X1000ES simply has superb image quality that sets it apart from its rivals. We begin with Planet Earth II, and there’s no doubt that this Blu-ray player is talented. From sublime mountain ranges to the tracking of migrating Pecora deer across rocky landscapes, the UBP-X1000ES captures both very well.

As the camera moves across vast landscapes and islands covered in dense, lush forests, the way the player handles tiny details at the edges of objects creates a feeling of dimensionality. Light falling around the trees draws you into the image and brings with it a real sense of scale.

Similarly, the X1000ES handles extreme contrasts well. Watching white waves break against the inky blacks of a cliff face covered by a penguin colony, the UBP-X1000ES renders it naturally, but with a good deal of pop to the colour.

It’s not only in bright scenes that the UBP-X1000ES proves worth its salt. The dark interior of the spaceship in Alien: Convenant, in 4K HDR, has layers to the blackness. When “Danny” Daniels trips and falls to the floor while trying to escape from the newly birthed Xenomorph, the UBP-X1000ES tracks her motion well.

Even background details, such as the texture of the ship’s grating, is given more attention from this player than its rivals, including the Oppo UDP-203.

Knocking it down a notch in terms of resolution and colour range, with a standard Blu-ray of the Coen Brothers’ Fargo, this player retains those same impressive characteristics: the stitching of Carl Showalter’s jumper, or the beads of sweat on Jerry Lundegaard’s face as he tries to negotiate with the criminal are sharp without being overly-emphasised.

Even with a more limited colour spectrum, the UBP-X1000ES has greater subtlety to the way the light falls on to Wade Gustafson’s face as he watches television. It’s a richer and delicately managed picture, with a wide spread of fainter colours at the edges of the reflection, than we’ve seen on similarly-priced kit.

Although there is an expected drop in picture quality when playing DVDs, the UBP-X1000ES is good at upscaling to 4K and details like the threads on Mark Zuckerberg’s purple hoodie or tussled hair show up well.

But picture is only half the battle – a good Blu-ray player should have good sound too. We load up Stevie Wonder: Live at Last Blu-ray and select Master Blaster (Jammin’).

It’s a song that needs a tight grip on the bouncing drumbeats to keep them energetic. The UBP-X1000ES rises to the challenge, capturing the spirit of the performance. In no time, our feet are tapping along to Wonder’s funky rhythms.

Dynamically, it retains the drive and potency of a film’s soundtrack without any hassle. Why So Serious?, the first track on Hans Zimmer and James Newton Howard’s score for The Dark Knight, the build from the scrabbling, chaotic strings as they gain power is smooth and yet retains intensity as the deep, harsher bass notes come in.

There’s also a nice space as the strings move from left to right, and back again, creating an atmosphere of chaos that’s only fitting for the Joker’s theme.

Compared with a rival Blu-ray player, the Oppo UDP-203, there’s a significantly different tonal quality. Oppo’s player has a richer, more relaxed sound while the Sony has greater energy and precision.

We play John Wick: Chapter 2, and the train-bound fight between Wick and Cassian has a bit more space and weight from Oppo’s player.

However, the UBP-1000ES has a greater sense of power when handling the film’s soundtrack and rapid gunfire – we prefer this character over the UDP-203’s smoother sound.

Getting the player up and running is straightforward. When optimising for picture quality, there are a few adjustable settings, such as noise-reduction modes, but we find the Sony’s natural balance adequate as it is.

It has the same black-box aesthetic as the cheaper UBP-X800, the only significant difference is that the X1000ES has a handy screen on its front so you can tell which menu you’re on.

Unfortunately, it retains the same remote control as the UBP-X800, which for a premium player is a little disappointing. The remote isn’t backlit, so it’s a challenge to use it in a dark room.

The overall build quality is good, though; the chassis is rigid with a sturdy feel.

There is a decent array of streaming services pre-installed on this player, including Amazon Video, Netflix, BBC iPlayer, Demand 5, YouTube, and Spotify for music streaming.

It’s not the full list you might expect – All 4 and ITV Hub are missing – but if you have a recent television capable of a 4K HDR picture, it’s more than likely these apps are already available on your TV.

One important omission is Dolby Vision, a form of HDR that uses dynamic metadata to adjust your picture frame-by-frame, and provides a more refined image than standard HDR.

Although it’s supported on some Blu-ray players including the Oppo UDP-203, the lack of inclusion here means this player isn’t as future-proof as it could be.

If you are using the player’s built-in services the UBP-X1000ES has dual-band wireless connections on the 2.4GHz and 5GHz wavelengths, so should one drop out it can switch to the other and continue playing content. There’s also an ethernet port for a more stable alternative to wi-fi.

On the back are optical, coaxial, two HDMIs (including a dedicated audio output) and RCA outputs.

It supports both Dolby Atmos and DTS:X, which puts sounds above and around you for an added vertical dimension to your movies. The player can also support hi-res files, up to a 24-bit/192kHz resolution.

If you’d rather keep your music to yourself, you can pair the player with some Bluetooth headphones. We try it with the Bose QuietComfort 35 IIs, and it is not only quick to connect, but provides a satisfyingly detailed and dynamic sound.

Whether you’re looking for an upgrade to your existing Blu-ray player, or simply want the best player you can for your home cinema set-up, there’s no doubt in our mind that the UBP-X1000ES is well worth your consideration.

It looks good, has a great picture quality, and can keep up with the most difficult of tunes while keeping your foot tapping. With Christmas coming, Santa Claus is likely to see this player appear on a good number of wishlists.