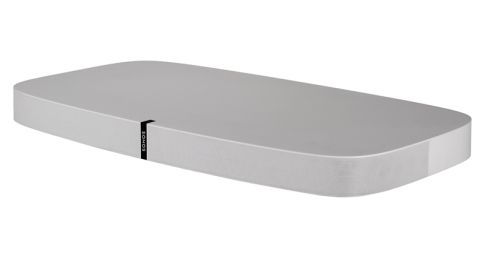 One of the simplest, most stylish and streamiest soundbases around, but the Sonos Playbase isn't flawless

The Sonos Playbase fills a gap in the Sonos system, albeit a small one. For those wanting a Sonos TV speaker that sits directly underneath your TV (as opposed to somewhere near, it like a soundbar), you now have an option.

The appeal of soundbars is obvious: transform your TV’s sound with one neat unit. But while a soundbar makes lots of sense when it can be wall-mounted under an also-wall-mounted TV, those who stand their telly on a pedestal or other piece of furniture can’t always find a place for a long, awkward bar of speakers.

The solution? A soundbar that isn’t a soundbar at all, but a base upon which you plonk your telly. It’s really obvious when you think about it. So obvious, in fact, there are plenty of soundbases on the market.

The Sonos Playbase (can you see what it did there?) is far from the first device of its type then, but, being a Sonos product, it’s neater, more stylish and streamier than practically any rival too.

There’s no mistaking this for a Sonos device. The design, available in matt black or white, is smooth, stylish and minimalist in the way of all of the company’s products.

There’s just one traditional button on the whole thing - a round, recessed little number on the left-hand side you use for linking the Playbase to your network and any other Sonos speakers you might already have.

The only other controls on the unit itself are a touch-sensitive play/pause button and two little touch-sensitive panels for volume control that flank it on the front of the top panel. You might actually find you’ll never touch these controls, because you can control everything from Sonos’ simple, exhaustive app.

It may be simple, but the Playbase is also very solid and able to support TVs weighing up to 35kg. These days, only truly huge tellies tend to tip the scales over that sort of weight. And if you’ve got a telly with really widely positioned feet, the Playbase is short enough that it will almost certainly fit under the TV and between them. Should you have any issues with the placement or just fancy an even neater setup, you can buy a wall bracket.

Oh, and if you have an enclosed rack that your TV sits atop, don’t be tempted to put the Playbase on the shelf below - that will seriously hinder its ability to spread sound around the room.

As with the Sonos Playbar, the Playbase has just one audio input - optical. The idea is all your video sources run into your TV, and just the one optical cable (which is included) takes the sound from your TV and into the Playbase. If you want a Sonos speaker with an HDMI input, you need to look at the Beam.

Without HDMI, setup is simple in theory but in practice can be tricky to ensure all of your sources are sending Dolby Digital 5.1 (the only surround format that the Playbase supports) to your TV and that your TV is then passing that sound signal to the Sonos without doing anything nasty to it.

You’re unlikely to have kit that won’t do this - almost every modern TV will pass through 5.1 these days - but getting it to actually do it can be a head-scratching voyage through menu upon menu.

Sonos’ support technicians are very helpful (we know, we had to call them), and one way or another you will get up and running in the end, but in our experience it’s not always the super-simple process that Sonos sells it as.

In fact, rival soundbars and soundbases that accept almost any signal via HDMI and then send the video to your TV are arguably more simple, as they don’t require you to particularly think about the sound formats being used at every link in the chain.

At least everything else about the setup process is simple, with the Sonos app having a step-by-step guide complete with simple instructions, diagrams and even videos. During the process you’ll assign the Playbase to a room of your house, program it so the volume can be controlled via your TV’s standard remote and, if you’re an iPhone user, tune the sound to your room using Sonos Trueplay.

Trueplay is rather like the mic-based setup that you’d use to automatically fine-tune a home cinema amplifier, but here it uses the iPhone’s own microphone (Android phones aren’t supported because there’s apparently too much variance in the microphones) and tunes the sound not just for your TV-watching position but also for the room as a whole.

It makes a huge difference to the presentation, to the extent that if you’re an Android user it’s well worth getting a generous iPhone-owning friend to tune your Playbase for you.

When you do get listening you’re going to be immediately impressed by the width and three-dimensionality of the sonic presentation, particularly if you’ve previously been listening to your telly’s own speakers.

The narrow channel of sound that you’re probably used to is transformed by the Playbase into something airy and spacious, with it’s 3.1 array doing a quite remarkable job of convincing your ears you’ve got speakers in the far-left and far-right corners of your room. Certainly you wouldn’t expect an all-in-one unit this slim and compact to manage that.

Do bear in mind, though, this width can be helped or hindered by the size, shape and furnishings of your room, because this is a system that relies upon bouncing sound off walls.

We expect most will be fine, even if your TV and Playbase are in a corner or you have more air on one side of the room than the other, but we did try it in one room that had floor-to-ceiling fabric blinds that soaked up way too much sound and left us with a wonky presentation.

As mentioned, we think those sorts of scenarios will be rare, but it is worth being aware of. Thankfully, Sonos offers a quibble-free 100-day returns policy if you buy direct through its own website, so you can always try the Playbase (or any Sonos speaker, for that matter) in your room knowing you can send it back if it doesn’t behave as expected.

Assuming you do get the intended spacious sound, you’ll find it’s combined with bass that’s punchy, authoritative and energetic. The bass here is far more natural and tonally expressive than that of the Playbar, which feels as though it’s compensating hard for its diminutive chassis and sounds a little artificial as a result.

All told, this is a punchy, dynamic and fairly detailed performance, particularly when compared to the Playbar. But that isn’t to say it’s perfect.

The treble is the biggest issue here. It’s just too sharp and sibilant, which means big special effects are often ruined by a harsh and domineering top-end that annoys the ear, and that the sibilants in vocals are overdone and incessant.

This is a flaw that’s most pronounced when you have Trueplay active, but it’s also there when you turn Trueplay off. Turning Trueplay off also seriously reduces the width, dynamism, punch and clarity of the presentation, so ultimately we’d recommend leaving it on - even though it brings the harsh treble to the fore.

The other sonic issue with the Playbase is a slightly recessed mid-range, again particularly when Trueplay is turned on. It’s not set too far back, though, and it doesn’t hinder the clarity of the dialogue, so is ultimately only a minor flaw.

The Playbase still has a number of strengths that haven’t yet been mentioned. The first is, unlike most soundbars and soundbases, it can be upgraded to a full 5.1 system with the addition of a Sonos Sub and two Sonos Play:1 (or even Play:3 or Play:5) speakers to act as the LFE, surround-left and surround-right channels.

This is an expensive route to go down, with a total system cost of £1800, and compared to a more traditional home cinema system is quite limited, especially when it comes to surround sound formats - Dolby Digital via optical is still the only way to get movie sound in.

But it’s also incredibly stylish and neat, with each of the additional speakers needing a physical connection only to a power socket. It also works impressively well.

Yes, in bigger rooms there’s a slight sonic gap between the front-left/right and surround-left/right, and that more traditional system will still sound better, but in its own right the Sonos 5.1 system is punchy, dynamic and enjoyable to listen to.

The other major advantage that the Playbase has over almost any other rival (barring the Beam or Playbar of course) is that it’s got the full breadth of features that you’d get with any other Sonos speaker, namely seamless, simple multi-room integration and almost limitless musical options.

Sonos is still as good as any option when it comes to support for streaming services, with Tidal, Apple Music, Amazon and Spotify all on board, internet radio supplied through TuneIn, and any music stored on your computer, phone or NAS device is playable on your Playbase.

The app itself struggles slightly under the weight of all of these features, but universal search makes it easy to get to what you’re looking for and, if you’re using Spotify or Tidal, you can stream straight from their respective apps.

The only significant gap in the Sonos arsenal is high-res music, which the company resolutely doesn’t support. The argument is that hi-res stuff is still too variable in sound quality, which is a good point, but with MQA finally gaining some traction it would be good to one day see it supported.

MORE: MQA audio: What is it? How can you get it?

If you’re eyeing up a Sonos Playbase, you’re probably the sort of person who isn’t too bothered about a lack of hi-res support, and that’s fine.

What Sonos offers is simplicity, style and a stunning sonic upgrade over any and every flatscreen telly in existence.

Which is why it’s such a great shame that that harsh treble prevents the Playbase from achieving what would otherwise almost certainly be a five-star rating.

Still, if you’re a dedicated Sonos fan looking for a lounge speaker that you can plonk your telly on, there’s loads to like about the Playbase. Just don’t expect perfection if you buy one.