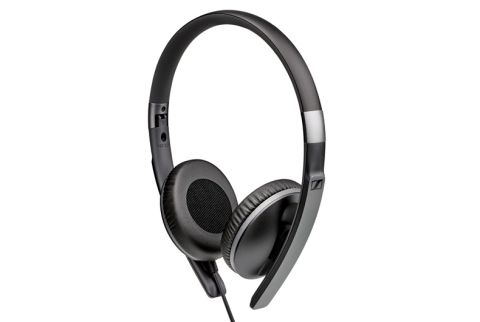 Not every pair of headphones has to be a status symbol.

The Sennheiser HD 2.30s, for example, are about as plain as they come – the kind of headphone Sennheiser might have released before Beats turned 90 per cent of street pairs into a multi-colour fashion show.

At £80, they’re a solid buy if you want to opt out of the style trend.

The Sennheiser HD 2.30s are slimline on-ear headphones. Their pads are around the same size as the average adult ear and the headband a slim band of soft-touch plastic.

Looking at the Sennheiser back-catalogue, their closest relatives are perhaps the PX200 or HD218. The Sennheiser HD 2.30s are even simpler-looking, the visible parts of the cups just smooth grey ovals.

With so many headphones trying hard to stand out, the stripped-back look is assured and refreshing. This pair makes its mark by seeming not to try at all.

All the portable headphone basics are here too, though. The HD 2.30s are light, feel well made enough to justify the £80 price and fold up for easy transportation.

Like the Sennheiser Momentum On-ears, the cable is removable and uses a twist-to-lock mechanic to keep the cable in place. It uses a 2.5mm jack at the cup end.

Our version has a three-button remote designed for iOS devices (they're also known as the Sennheiser HD 2.30i), but Sennheiser also makes a version for Android devices, called the HD 2.30G. The cable is 1.4m long and ends in a straight 3.5mm plug.

In several respects, the HD 2.30s have a classic Sennheiser sound. It’s slightly dark thanks to a moderate roll-off of treble, and the mids are a little boxy-sounding.

These are sound signature choices rather than flat-out issues, though. They give this relatively affordable pair of headphones a chunky, harshness-free sound that aims for something other than the easy wins of sparky treble or ear-flattening bass.

The mids are quite forward, giving central channel vocals strong presence, without relying on treble to fill in detail, as cheaper headphones favouring a dual emphasis on treble and bass often do.

A slight bump to mid-bass does mean added substance to lower-definition fodder. Like adding cornflour to a sauce, it doesn’t add much flavour to the recipe, but the net effect can be positive.

If you like the sound of a mid-focused headphone without this thickening agent, the Grado SR60e and SR80e have a comparable tone, but with much greater clarity and mid-range definition.

The Grados also sound far more open and wider, two aspects which are just passable in the Sennheiser HD 2.30s.

The Grado SR80e are also much less practical, though, as they are open-backed. They leak sound and provide almost zero isolation, whereas the Sennheiser HD 2.30s don’t.

These aren’t ultra-high-end headphones, but they aren’t meant to be, and their sound is generally successful.

The only holes in their make-up are at the very bottom and top: bass depth is just fair and we’ve already mentioned the conservative treble approach.

The Sennheiser HD 2.30s are solid headphones for people who want good sound quality but don’t want to pay through the nose, and aren't interested in paying more for a funky look.

These are headphones that trade searing treble and rocking bass for a sound that’s more sanitised throughout the spectrum.