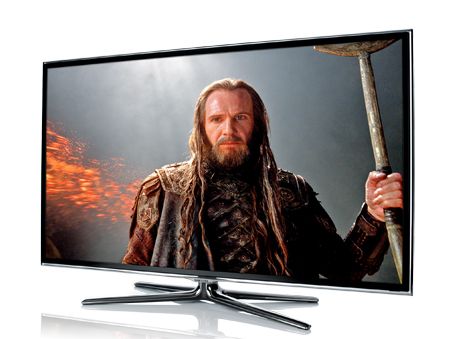 Slim of profile, skinny of bezel and with a swivelling claw-foot stand, the Samsung UE46ES6800 is a handsome devil – and fortunately for consumers, it isn’t just a pretty face.

Specification, for example, is right on the money. Three HDMI and three USB sockets are the headlines as far as inputs go, and a Freesat tuner alongside Freeview HD is good news.

There are a couple of pairs of Samsung’s splendidly lightweight, comfortable and relatively stylish battery-powered active-shutter 3D glasses included too, making an aggressive price look even more tempting.

And there’s also a stack of online stuff – Samsung assures us BBC iPlayer will have taken its place on the menu alongside the many other apps by the time this review is published.

In action, there’s much to admire. We’re not about to hold the Samsung responsible for the poverty of its standard-def TV images – picture noise, and a lack of detail is par for the SD TV course.

Switching to high-def fare (we preferred the Freesat tuner, but those without a satellite dish won’t feel short-changed by the Freeview HD alternative), the Samsung offers strong contrast, mostly secure motion, and a broad and subtle colour palette.

Upscaled DVDs are a bit of a halfway house between SD and HD TV pictures. There’s not the endemic picture noise of an SD broadcast, but the ES6800 can’t rid upscaled images of all shimmer or slightly jaggedy edges, and detail levels are only so-so.

Skin-tones are rather coarse, too, and the Samsung is flustered by motion a little more than we’d like.

A half-decent mid-range Blu-ray player will be a better bet for DVD upscaling.

Our copy of No Country For Old Men revels in sky-high detail, smooth edges, great apparent depth of field and strong contrast.

Even bright whites tones retain detail, and while black shades are just slightly uniform compared with the best of the Samsung’s rivals they are, at least, dark.

Only the most taxing on-screen motion can trigger any alarms, and the UE46ES6800 reasserts itself quickly once the real complexity dies down.

Up the ante still further with 3D and the good news keeps coming. Samsung’s active 3D glasses are almost as easy to wear as LG’s passive specs, and the 3D images the UE46ES6800 delivers are bright, detailed and mostly stable.

There’s a degree of restlessness in the more trying scenes of Cave Of Forgotten Dreams, but generally the Samsung presents a convincing 3D image in a stable and controlled manner.

Try a 3D game and while the UE46ES6800 sacrifices the last scintilla of motion stability for razor-sharp response, it’s bright, colourful and high in contrast.

At the risk of becoming repetitive, we have to say the Samsung sounds exactly as we’ve come to expect flatscreen TVs to sound: short of body, pretty hard at the top end and with no dynamic range worthy of the description.

And yet, despite all those good points – and this really is a fantastic telly – the Samsung finds itself a star short of top marks when up against the like of Sony's KDL-46HX753 and KDL-46HX853.