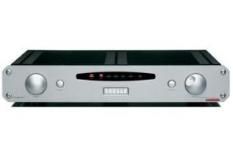 An excellent buy, it puts most of the opposition to shame when it comes to sonic ability

This preamp isn't going to win any beauty contests, using as it does the same casework as the company's M-Series integrated amplifier. There's nothing wrong with that – after all, fancy casework can account for a sizeable chunk of the cost of a product, even at this level – but it does mean the Roksan doesn't have the visual appeal of some of its price-competition.

And the preamp is a relatively simple device, being built for performance rather than to deliver trick facilities. It's a dual-mono design with complimentary, symmetrical layout, and a lot of attention paid to power supplies; there are separate power supply provisions for the left and right amplification, the buffer section, the control and logic system and even the optional phono stage. In fact, everything possible is done to maximise performance.

Basic looks belie its performance
As a result, the slightly basic exterior design is soon forgotten: this combination sounds so staggeringly transparent we couldn't hold a grudge for long. Those expecting a slightly uprated Caspian M-series integrated amp performance will be shocked by what this preamp can do when used with the company's stereo power amp or monoblocs.

The clean, crisp and detailed presentation delivers every vocal nuance with class-leading skill, and while the wrong partnering equipment can edge the Roksan towards being clinical, with a capable yet refined source you won't run into problems. Cables are important, too, this preamp working best with Roksan's own HCD-02A interconnects.

If you put features, cosmetics or power output high on your list, there are better alternatives. However, if you want the most honest-sounding preamp you can get for the money, the Roksan can't be ignored.