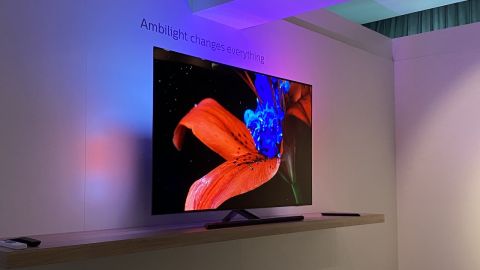 OLED panel technology has more or less hit its limits, which means manufacturers need to work extra hard to squeeze every last drop of performance out of the hardware, mainly by using clever software.

That's why Philips is going big on AI technology for its 2020 OLED sets, promising that its combination of a bespoke neural network and advanced machine learning will result in across-the-board improvements to picture quality.

That sounds good, but is it? Based on a brief demo session, it looks like it might well be.

This core OLED in Philips's 2020 range (a B&W-fettled flagship model is likely later in the year) is actually represented by two model numbers. The only difference is the stand: the OLED805 features a 'chamfered stand' while the OLED855 has a 'central stand angled to the table'.

Both stands are finished in dark chrome and are designed to give the impression that the sets are floating above the table-top. We wouldn't necessarily agree about the floating part, but the stand of the OLED855 that we've seen is certainly elegant.

It's a handsome but discreet design, with the thin, dark and almost entirely unblemished bezels allowing the screen to do the talking. In profile it's thicker than most rival OLEDs, and over a larger area. That's because of the three-sided Ambilight tech on board, which not only takes up space, but also requires a certain distance between the TV and wall when mounted.

The OLED805/OLED855's physical connections include four HDMIs, two USBs, an optical audio output and headphone socket. The HDMIs won't be 2.1-certified, but will offer some elements of the HDMI 2.1 specification, including support for Auto Low Latency Mode (ALLM).

Variable Refresh Rate (VRR) won't be supported, though, as Philips is waiting for next-gen consoles before making that a priority. eARC is off the menu, too, with Philips claiming that it isn't required to get Dolby Atmos from a TV as long as the format used is Dolby Digital Plus – which is the current approach of streaming services such as Netflix and Amazon Prime Video.

Philips is sticking with the Android TV operating system for its 2020 sets, and the OLED805/OLED855 will launch with Android TV 9.0 pre-installed. The next version of Android TV will be offered as a download at a later date, once Philips has deemed it stable.

While Android TV still isn't quite as snappy or intuitive as the bespoke operating systems of Samsung and LG sets, it is vastly better than it was, with few gaps in its app repertoire. In fact, Philips is pointing to the availability of Disney+ on the platform at launch as a real highlight.

As with its 2019 models, Philips is continuing to support both HDR10+ and Dolby Vision (as well as HDR10 and HLG, of course) on its 2020 sets. Filmmaker Mode will be supported, too, although Dolby Vision IQ won't – at least not this year.

The brief picture demo Philips treated us to was really designed only to show off the new AI mode. It does, though, look very impressive.

First, we saw the 65in version of the OLED855 in AI mode next to a 55in version of the same set running Movie mode. The difference was huge, with the 65in model proving super-crisp, punchy and dynamic, while its smaller sibling looked comparatively lifeless and flat. That said, Movie modes always take a rather warm and soft approach, so the difference here was always going to be pronounced. Perhaps a comparison between AI mode and Standard would have been more revealing.

The second demo consisted of a look at the AI Demo Mode that is integrated into the new TVs. This splits the screen into two vertical panels, with the left untouched and the right enhanced by the AI processing. What's more, below the live picture is a series of graphics that reveal, in real-time, exactly the analysis and enhancement that the TV is undertaking.

Not only is it reassuring to see the processing as it happens, but the improvements also look fairly clear, with particularly pronounced bumps to brightness and vibrancy and no sense of unrealism being introduced. This was a short demo using Philips's own test footage, and it will interesting to see if it also looks beneficial with 'proper' content. It does look impressive at first glance, though.

There's still a lot that we don't know about the OLED805/OLED855. How does it sound? What's its upscaling like? How much will it cost?

We'll have to wait until the launch date in May to get answers to those questions, but the omens are good. At first glance, the AI processing looks to be genuinely beneficial, and the combination of OLED picture quality and Ambilight remains as entrancing as ever. If the rest of the ingredients prove as tasty as expected, we could be looking at an Awards contender.

More Philips TVs with Bowers & Wilkins speakers are on the way